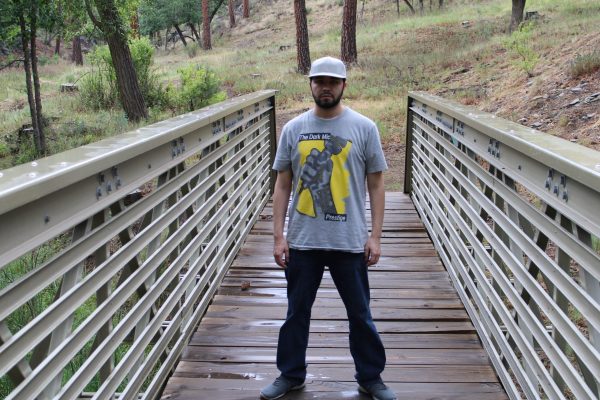 What is “real” Hip-Hop?  It’s a loaded question that gets people heated at every turn.  Social media comments are overflowing with debates on every post about which artists are good, and which ones have no business being in the game.  Rappers themselves on social media appear to be clout chasers who will do anything for the following half the time.

For purists the answer to the above question is clear – real Hip-Hop and real emcees are those who can lay down a lyrical verse with substance and rip a great-sounding instrumental to shreds, usually 16 bars at a time.  It’s clear for most that mainstream Hip-Hop has gone the way of promoting oneself through brash online behavior.  The songs themselves are more about repetition and catchy melodies to hook their audience.  That’s all good and fine, but it’s not everybody’s cup of tea.  Thus, leaving a void to fill for people who like clever wordplay and more depth to each bar.

Enter The Dark Mic, the self-proclaimed lyrical phenomenon from Albuquerque, NM.  Having taken an extended break from releasing new music, he recently released his new single, “The Takeback”, featuring AFRO, who himself is an established underground legend.  Boasting an ominous instrumental produced by The Dark Mic, this song features three verses of clever wordplay, metaphors, and just general bars for days that underground Hip-Hop afficionados can appreciate.

The track finds The Dark Mic and AFRO entering the roles of two action heroes to save Hip-Hop from the grasp of lesser-qualified artists.  The style of the song is reminiscent of old-school Eminem or mid-2000’s East Coast rap with funny quips and double entendres throughout.  The Dark Mic starts off the song, jumping right into character, and it’s not long before he paints the picture that his enemies end up “like a witness that was planning on snitching on one of the Clintons”.  He continues on a warpath utilizing various movie references to illustrate his keen ability to destroy any emcee he crosses throughout the verse.

The second verse, and AFRO’s only verse, is a showcase on technical rapping ability.  Top to bottom, he shows why his flow is one of the most respected by Hip-Hop heads today.  Just as The Dark Mic does, he boasts about his skill and ability to take out his enemies one-by-one, likening his abilities to those of legendary action movie hero, Rambo.  It’s truly clear he came to make a statement.

In between the chorus and the last verse, we’re treated to an interesting pause of sorts.  Keeping in theme with the track, it feels like you’re watching the dust settle before the final battle takes place in a big-budget action flick as The Dark Mic narrates, expressing his intention to go back in and finish things off.  From there as the final verse kicks in, it’s clear The Dark Mic understood the need to showcase his own abilities to close the song out.  Incredible wordplay and multi-syllable rhymes flood the third verse as The Dark Mic absolutely shreds the beat apart, indeed warranting a rewind or two to catch all of what he says.

According to The Dark Mic, real Hip-Hop lives in the underground.  After listening to him and AFRO go into beast mode for just over four minutes, I think most would agree.  This song is definitely in rotation for underground Hip-Hop lovers, and anyone generally looking for that old-school lyricism and wordplay.