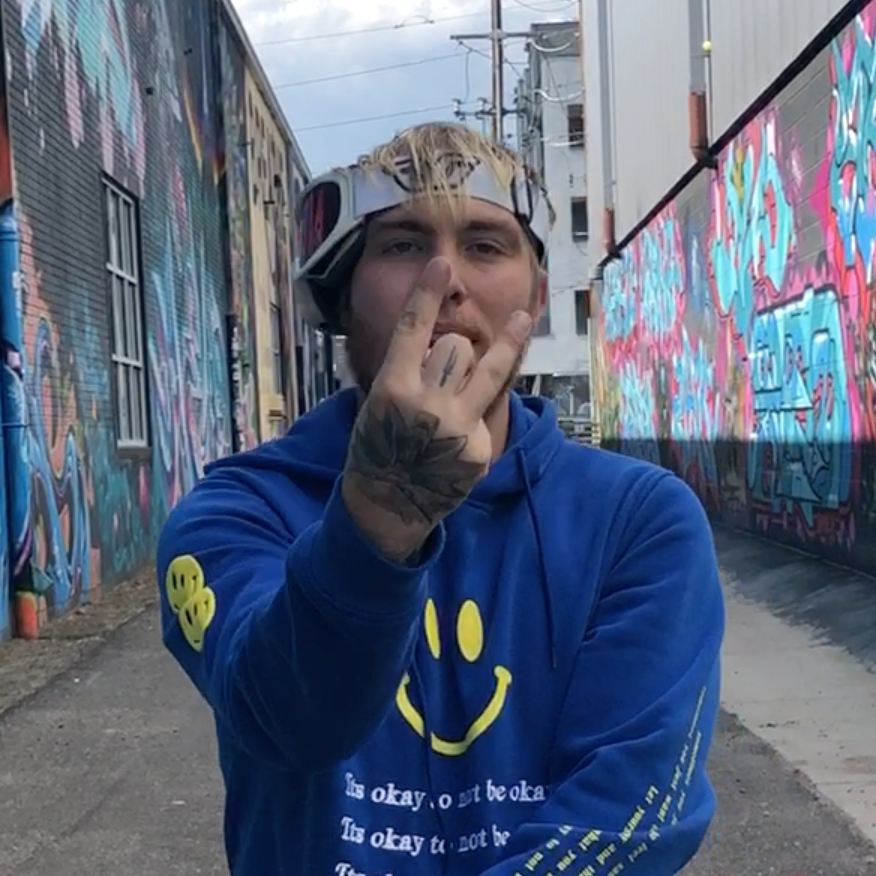 Lil ugly sister xxx has just released his debut album “Kawaii or Die”. With the first track “Throw That Ass if You Sad Baby” we get a sense of sister’s boyish and playful ways in his music. The track opens up with a dance vibe and a female vocalist singing “my heart is beating slow” sonically it sounds amazing and instantly hooked us into wanting to hear the rest of the album. About 30 seconds into the song it switches up to Lil Ugly Sister XXX’s deep gritty raspy voice over a new age west coast type bass line rapping “if you depressed throw that ass baby. Let me see the tears on this cash baby.” We couldn’t help but chuckle a bit from the playful lyrics, but still wanting more. The song has many switch-ups with Jpop influences and what seems to be anime voice samples chopped throughout the song. The happy almost cute instrumental and deep voice of Sister is odd but rewarding, to say the least. After just the first song we found something unique and knew we had to finish the album in its entirety.

We love the album title “Kawaii or Die”, What exactly is kawaii?

If you’re familiar with Japanese culture, you’ve probably come across the term kawaii. It conjures up images of pastel colors, Hello Kitty, frilly dresses, anime, and, of course, Japan for many people. The word kawaii comes from a Japanese phrase that means “to blush,” but its meaning has evolved and is now translated as “cute.”

But kawaii is more than just cute: it’s a big aspect of Japanese culture that can be found in anime, fashion, art, music, and lifestyle, among other things.

Kawaii culture has a long and illustrious history

“This album took me close to 6 months to produce, record, mix, master. I do everything in my home studio. I don’t do well in big studios because I don’t like having any influence from anyone other than what’s going on in my head. I produce the instrumental and if it doesn’t make me smile or doesn’t feel unique I don’t use it. I feel like there are so many copycats in this music shit I would much rather make my music unique and authentic to me than try to follow trends and be miserable just for a dollar. I like to throw a lot of claps in my beats so you can shake that booty to the beat. Then I laugh to myself imagining them turning up in the club to lyrics like “pull it, twist it, bop it” or “Tamagotchi touching on the pussy and the butt” like some 90’s nostalgia commercial lyrics vomiting on the track. I just try to have fun with the shit and not take myself or anyone too seriously, I put my entire personality into the music the good the bad, and the ugly.” – Lil Ugly Sister XXX

Our top 5 favorite tracks on the album are;

All my Friends Are Dead

Throw That Ass if You Sad Baby

We noticed there were no features on the album so we asked Sister if there were any artists is working with in the future or would like to work with;

“Yea I have a long list of artists I would love to work with, but I constantly tell myself like ” I don’t think they wanna work with someone who calls themselves ‘Lil Ugly Sister xxx’ lol.” But I linked up with two artists at a show I threw in Denver; Jbturnmeup & Ray Reed those dudes are solid as fuck. I’m gonna work with them for sure. I don’t think anyone else is going as hard as them from my hometown Denver in my opinion. I would love to work with City Morgue, Deathgrips, mylk, Tame Impala, Oceano, Lil Pump, Gucci mane, Chief Keef. Man, there’s a bunch of talented artists out there but those are just some big names that come to mind. I’m open to working with anyone though.”

“Kawaii or Die” leaves us wanting more from the new artist. Memorably standing out as a very fun, playful, boyish artist with an untapped depth that we feel we will get more of as he continues to release music. The variety on this album was a pleasure able experience from beginning to end.