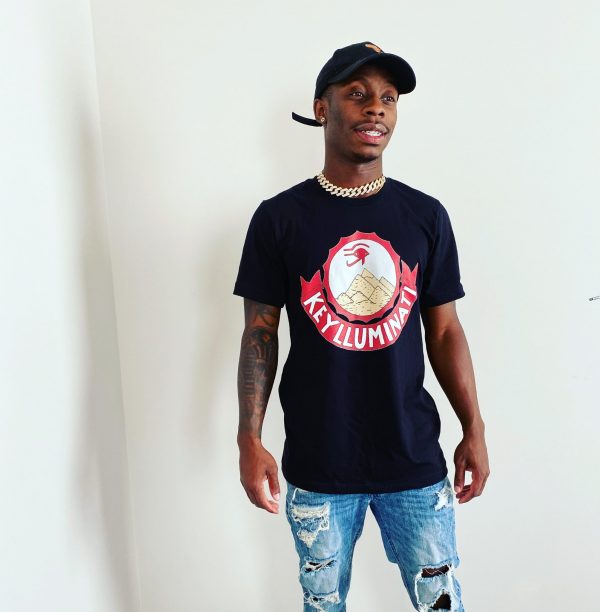 One of Tampa’s Top 5? A bold statement coming from one of the cites’ own. Up and coming artist, Keylluminati, is confident that he can obtain a top spot in the industry. Born and raised in Tampa, Florida Keylluminati started out writing poems in middle school thinking nothing would actually come from them. Fast forward and he decided to enter the industry in Mid 2017 dropping his first single “Watchu Know”. In late 2018 he dropped his first project, “The Change Up”, which included the hit song “Everybody”, a Hip Hop song that showed his community his talent, lyricism, and love for the black community.

Five months later in February 2019, Keylluminati dropped his second project “The Rebirth”, this project elevated his talent and surpassed his first by a landslide. Keylluminati found more of his sound and confidence in this project. The first song on the project “Get Em” gives a great example of what is meant by the term elevated. He continues to prove that when there is a limit he will reach it and go beyond. He continued the year of 2019 dropping singles and doing collabs. Some of those top singles are, “Callin Me Ft. Arie”, “ Give Me Life”, and his hit single that gives a little background information on him “ True Story”.

To end his 2019 off he dropped a mixtape titled “Offlimits”. On the mixtape he does covers of songs to include Mustard and Roddy Rich “Ballin”, Lil Tecca “Ransom”, BlueFace “Thotiana”, and Lil TJay “FN”. Again he shows that he can elevate and keep up with the best if not outdo. The year 2020. With a pandemic going on Keylluminati did not let anything slow him down. To start the year off Keylluminati dropped a very underrated single “Tell Me” with a Bobby V. sample. Keylluminati has shown his versatility when it comes to hip hop. Not only does Keylluminati rap about the situation he finds himself in he also vocalizes to his fans and the world that quitting should never be an option for anyone. Two examples of this are in his singles “Never Lose” and “Speak to Em ft Kiara Pace”. Keyllumianti has claimed to be one of the best in his city and if someone does not think so to start that argument. He has earned the respect of his community and city as a force to be recognized and is continuing to prove himself. Keylluminati a rapper, songwriter, and lyricist, finds him on all major platforms.

We had a moment to sit down with Tampa’s Favorite to check his new music and more.

Music is basically what I do to clear my mind. Whenever I have a situation in my head, whether its happy thoughts or I am going through something, I turn to music and poems to put me into my comfort zone. I also like to see what I can do words and syllables

I think of a music outlet for artist, songwriters, and producers to be heard and make a name for themselves

3) Being that you are from Tampa, what is the state of Hip-Hop there? How would you title your style of music?

Hip Hop has a footprint in Tampa but that footprint is not as big Miami or Atlanta. I think I am more of a lyrical artist. I like for my rhymes tempo and syllables to be heard as well as the meaning behind what I am saying.

4) With your most recent music single “Speak to Em Feat. Kiara Pace” is Crazy FIRE, I Really Like It… Can you give us some details on how you came up with that song?

Thank you for your feedback. When I am writing my songs I have to listen to the beat before I write anything down. So I do not have a book with pre-written songs in them. The only thing that I do have is probably a punchline that I like that, if it fits, will throw into a song. When I heard the beat for this song the first thing that came to my mind was the words “Speak to Em” so I ran with that. When you are speaking facts and you get that co-sign from someone saying speak to em, you know you on the right track. That’s basically what it is, a song telling people that I am coming, with a team or not, whether they like it or not, I’m on my way.

I’m one of Tampa’s greatest mark my words. I will make an impact.
R.I.P. to my brother Greg, I know he pushing for me and watching over me.