Young Thug Claps Back At People Questioning His Sexuality 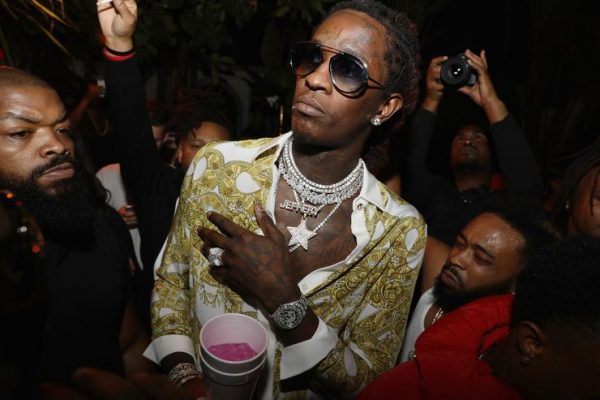 Young Thug is sick of haters calling him gay.

When you’re into fashion as much as Young Thug or Lil Uzi Vert, there are bound to be a few people questioning your sexuality. The way society currently functions, an adventurous sense of style equates homosexuality in the minds of many, leaving some afraid to explore the depths of their creativity in their everyday dress. Allowing his creativity to run wild in his style, Young Thug is one of the most eccentric personalities in music and in fashion. The general public began to take notice of his curious decisions when he posed for the Jeffery mixtape in a flowy dress. Much like Jaden Smith who expressed an affinity for wearing skirts, Thugger was critiqued heavily for the choice to wear women’s clothing with his haters calling him gay on multiple occasions. Jeffery has had enough of that talk though and has taken to his Twitter to denounce it.

While his choice of clothing for the Jeffery cover has been examined in queer studies classes nationwide, Thug is finished with people questioning his sexuality. After all, he has shown off his on-again-off-again girlfriend Jerrika Karlae on multiple occasions. The “Relationship” singer noted that the people that continually insist that he is gay don’t want any smoke with him, writing, “Opps talking gay but won’t play… lil boy.” While Thug’s message can ironically also be interpreted as an invitation, it appears as though he is rightfully denouncing his haters, telling them that they should come correct if they continue to keep his name in their mouths.

How do you feel about the constant implications that, because of his behavior, Thugger has to identify a certain way sexually?