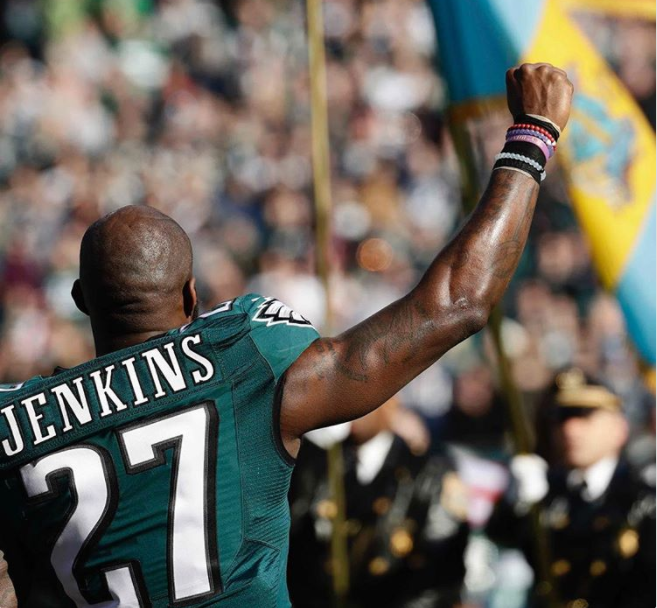 Till next time… 8 seasons in the book each one better than the last! New challenges … new adversity…. but new memories and more blessings! #flyeaglesfly #blessed #grateful 🙌🏾 @NFL @philadelphiaeagles

Instead of taking a knee during the national anthem, Jenkins held up a fist. And he did it for the entire season, with the lone exception being a game played on September 11. (Jenkins said he wouldn’t put his fist up out of respect for the day.)

Early on Thursday, Malcolm Jenkins put out a statement saying that he was going to continue to do his protest all throughout the 2017 season.

Here is his exact statement:

“Last season, I raised my fist as a sign of solidarity to support people, especially people of color, who were and are still unjustly losing their lives at the hands of officers with little to no consequence. After spending time with police officers on ride-alongs, meeting with politicians on the state and federal level and grass roots organizations fighting for human rights, it’s clear that our criminal justice system is still crippling communities of color through mass incarceration.”

“With the new call for a war on crime and drugs, the disproportionate oppression of poor communities and communities of color will continue unless legislative efforts and community engagement are made a priority. I’ve seen signs of life with regards to bipartisan support for criminal justice reform, but the support does not reflect the necessary urgency for real reform. This must be made a priority.

“As the blowback against those who stand up for what is right thickens, I feel it is necessary to push forward with a relentless determination. I want to send a message that we will not easily be moved or deterred from fighting for justice. There are many players across the league who have joined me in working toward new legislation and reestablishing trust and opportunities in our communities, and you can expect to see much more of that. I want to thank the fans across the country who have supported me in this effort to fight for equality and justice. I want to thank those that have dedicated their lives to this fight, as I know that it is not easy. And I want to challenge those who stay silent to be courageous and use your platforms to become part of the solution. God Bless.”

Last season, NFL players Steven Means, Marcus Smith and Ron Brooks all joined Jenkins in his protest. It will be interesting to see who joins him this year.