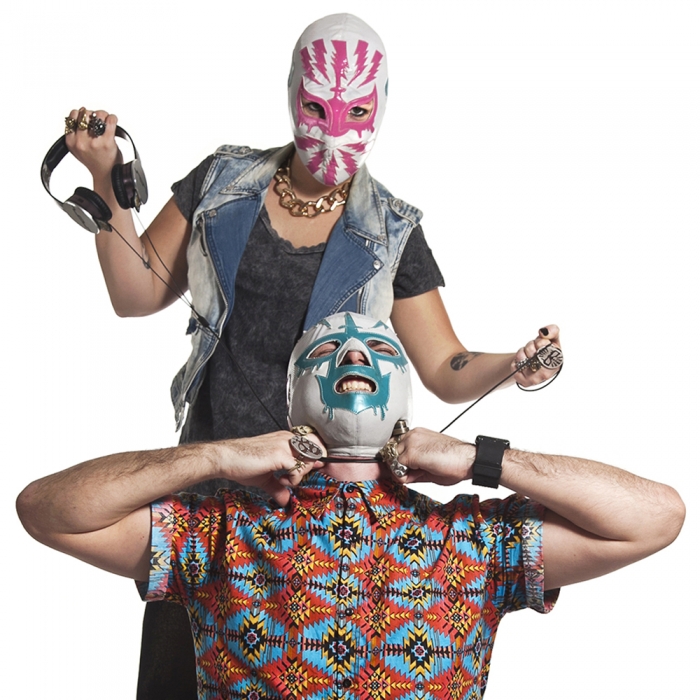 Pelussje is an Italian duo of electronic music producers and DJs. They already traveled the world, shared the stage and got support from Skrillex, Crookers, Deadmau5, Steve Aoki, Cyberpunkers, Congorock, Boys Noize, The Bloody Beetroots, Benny Benassi and many others. As well as from Rolling Stone Italy and MTV Clubland in the US.

Pelussje “Bombay” is a point of arrival as well as a starting-point: when they started producing music some years ago, they performed in community centres, listened to punk, indie and rap and their motto was “dance tonight, revolution tomorrow”. “Bombay” wants to honour those years and the rough and corrupted sound that artistically shaped Pelussje. It’s a look back, but they are also looking at the future and their present. That revolution started some time ago never stopped, it’s still going on, together with a powerful sound and vocals by the talented New York city base singer Eddie Lemonier. We are on the ring with Pelussje and their masks. “Bombay” is playing.

VMG had a moment to sit down with Pelussje to see what’s new and what’s he looking to gain from the hit single “Bombay”.

We always keep in mind that we have to do our best, our music has to reflect who we are,
and when you do something you love, staying focused and being motivated is simple.

A place where we always discovered cool music!

3) Being that you are from Milan, Italy what is the state of Hip-Hop there?

Milan has always been the capital of Hip Hop in our Country, and especially back in the 90s/early 2000s was the best period for this music, when everything was more linked with the original Hip Hop culture.
Now it seems that in general there is a growth in the technical level, but at the same time a dramatic loss in contents. And that’s even getting worse, due to the recent interest of the italian majors in this music. Unfortunately this kind of labels here are led by a bunch of old, conservative and definitely non-innovative people, which view of marketing and music is obsolete and too static. That leads to a bad and poor exploitation of this world, which is more complex and with a huge heritage, and most of all that needs to be always fed with new inspiration and innovation, to be fresh and alive.
Actually we think that italian rap (and the pop as well) has to make a big step forward to become huge, for example taking inspiration and starting to seriously collaborate with the electronic scene. The US one did it, and up to us it was a colossal and awesome reborn for this genre.

4) How would you titled your style of music?

Woh…this is a difficult one! We always experimented new genres, but if we have to name it and since what we love the most in producing a song is the the bass…we’d say bass music, or maybe global bass, due to the millions influences we love to throw in.

5) With your most recent music single “Bombay” is Fresh, can you give

us some details on how you came up with that song?
We wanted to go back to our origins, that means to us going back to the samples and the simplicity itself. The last 2/3 years were a period of experimentation and re-discovery of our musical background. We wanted to go back to a more street and raw sound, as we were forced to do during our hip hop years with the challenging, but iper-creative limitations of the analog sampling. And most important, with a focused eye to the future.
Definitely we made Bombay with this kind of mood in mind.

7) Who are some of your influences?

We definitely grew up with a lot of great music, thanks to our families, friends and the street background we both have. Our influences go from underground electronic culture led by Aphex Twin and friends, through the hardcore and punk/post-punk scene of the 80s and 90’s (Minor Threat, Black Flag, Cock Sparrer, Youth of today, Joy Division, Gang Of Four…), the Indie scene of the Sonic Youth, Fugazi, Pixies, Mogwai, Pavement, Le Tigre…All the old and new school rap, the 70s Breaks, Funk and Disco times, the Italo Disco and Wave/Nu Wave/No wave, Synth Pop 80s scene…The Detroit, Chicago House, and the immortal Techno and Werehouse/Rave culture. But also all the Oriental, Middle Eastern, Brasilian, Mexican, in general South American, Balkan, Gipsy popular music is also a huge influence for our music.

Bombay is now available for purchase on Beatport, and from the 8th of January also on iTunes, all digital stores and in streaming on Spotifyon. It’s also available on iTunes and our Soundcloud official page.

Plus, we’re working on tons of new music, so stay tuned… 🙂