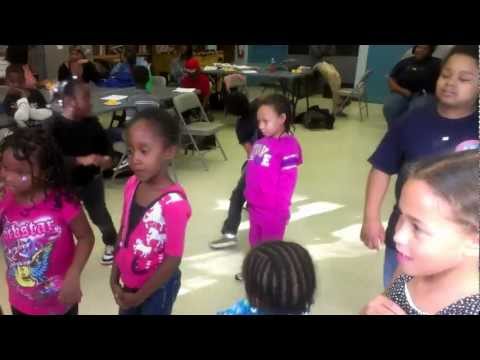 The Music Resource Center, or MRC, started a new exercise program at Walker Upper Elementary School, and it’s giving kids a chance to break it down during gym class.

“We keep it real hip hop up in here. We get some Beyonce, some Gangam Style,” said instructor Ike Anderson.

Organizers call it the gym class of the 21st century.

Sixth grade students at Walker are now shaking, sliding, and breaking it down, all in the name of better fitness.

“They can actually see that working out can be fun,” Anderson said. Students agree.

“It gets your energy up,” said Sixth grade student Kamol Aslanov.

“It’s very interesting. I think it gives kids a chance to sort of express their feelings with dance,” Sixth grade student Lena Keesecker said. “Some people say it’s weird and awkward, because they don’t like dancing in front of other people, but some people love it because they like to show off their moves.”

Anderson was once a student at Walker. Now he’s schooling students at his former elementary school on how to let loose and follow the rhythm. “It’s quite an experience,” he said.

“I wish it was not just Thursday,” added Aslanov. “I wish we did this every PE day.”

The program will be at Walker until the end of March. It will move to Buford Middle in April. All of the students who participate in the hip hop dance class will be eligible for a free one year membership to the Music Resource Center.