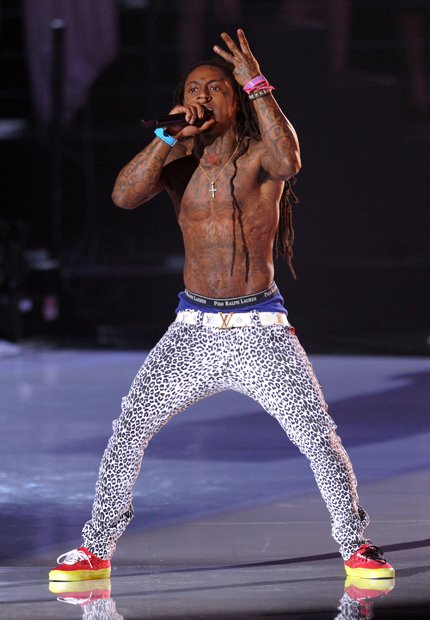 The latest fashion trend in hip-hop has its male stars raiding the women’s clothing department for inspiration.

Lil Wayne jumped around in skinny women’s pants during his performance at this year’s MTV Video Music Awards. Kanye West wore a multiprint shirt designed for women at the Coachella music festival. Kid Cudi has been seen in a plaid skirt, Snoop Dogg often wears jewelry designed for women, and Pharrell Williams is a fan of the Hermes-made Birkin bag, the ultra-expensive purse favored by Hollywood’s top actresses.

Elena Kiam, the owner and creative director of the jewelry brand Lia Sophia, says initially she was surprised to see her women’s line embraced by some of rap’s top acts like 50 Cent, P. Diddy and Snoop Dogg, who has worn her pieces in music videos and on magazine covers.

“When we were designing these really beautiful, sparkly necklaces, we thought more for top editors, maybe a celebrity movie star. We really weren’t thinking about hip-hop,” said Kiam, who also said Beyonce, Rihanna and Miley Cyrus have worn her designs.

“There was a rapper wearing the same piece as a soccer mom from Ohio,” she added.

Celebrity stylist June Ambrose says those multiplatinum musicians can pull it off because their personas stretch beyond the hip-hop culture. Of Lil Wayne’s much-talked about decision to sport a pair of boxer-revealing, black-and-white leopard print pants during the VMAs, she acknowledges his attire was “eccentric, but you know, he’s a rock star and pulls it off extremely well.

“Fashion should be as unisex as it is right now. It’s probably the most unisex we’ve seen it.,” she said.

West, hip-hop’s ultimate metrosexual who will debut his own fashion collection in Paris next week, wore a flowing, long-sleeved women’s shirt designed by French-based fashion house Celine earlier this year at Coachella. Though there were some who poked fun at his clothing choice, Ambrose saw nothing wrong with it.

“I think it’s acceptable if you’re not wearing a pair of heels with it and you’re not wearing lipstick and neither of these guys did that,” said Ambrose, who has styled Jay-Z, Diddy and Will Smith. “They treat fashion like it is art.”

It’s not just rappers — Russell Brand and rockers like Steven Tyler and Pete Wentz have worn women’s clothes in the past; Janet Jackson says the famous black sparkly jacket Michael Jackson wore during his legendary “Motown 25” performance was from his mother’s closet. And of course, androgyny has long been intertwined with pop, from David Bowie to Freddie Mercury to Prince (known for his trademark heels).

Bieber, the 17-year-old pop phenomenon, admits he has rocked women’s jeans because of their suitable fit.

“I think I’ve worn women’s jeans before because they fit me better,” he told The Associated Press at a recent fashion event. “I just think that whatever works, works.”

“It wasn’t like it looked like a woman’s sweater,” continued Bieber, referring to women’s shirt worn by West. “It was just a regular sweater that just happened to be a woman’s.”

But hip-hop culture — often defined as much by its masculinity as much as its music — always seemed to be different. It’s hard to imagine Eminem raging on stage in a breezy women’s top; rapper DMX once clowned Jay-Z for wearing sandals on the beach, deeming it unmanly. Hip-hop’s style in recent years has ranged from oversized sports jerseys to sweats to baggy, sagging pants and plain, oversized white T-shirts. Lately though, hip-hop stars are likely to sport clothes that are made to fit, and sometimes, tightly, like rock and indie hipsters.

“(Lil Wayne and West are) small enough to pull it off and that’s really what it’s about,” Ambrose said. “I don’t think Jay-Z could pull that off. He doesn’t have the body type for it. But these two guys are pretty petite and they’re able to pull those things off because (the clothes) come in a size that they can wear.”

Brea “BStar” Stinson, who has styled Usher, Bieber and Jaden and Willow Smith, says while women’s clothes can fit better on some men, at times they can be too fit.

“I thought those pants were great (and) that print is totally in right now, but I didn’t think that they were appropriate for (Lil Wayne),” Stinson said. “The fit was wrong (and) I think there’s only a limited amount of stretch a man is allowed in his pants, and they were just really, really small.”

Whether Lil Wayne will be sporting more women’s clothes is unclear. Still, this latest trend in hip-hop isn’t a new one, says Ambrose. She remembers seeing similar happenings in the 1980s with rappers like Grandmaster Flash, Kool Moe Dee and the Ultramagnetic MCs. Hip-hop was key in making diamond earrings popular for men in both ears. And Andre 3000 from OutKast was known for pushing the envelope with his style.

“Those guys were wearing leather pants, blouses. If you go back and look at the eccentricity, it’s really just come full circle,” she said of the past generations of rappers. “Back in the late `80s and early `90s, guys were wearing bright-colored jeans, skin tights, like leggings, and high boots.”

Ambrose — who will launch her own VH1 reality show “Styled By June” in February — feels that fashion and hip-hop go hand-and-hand when it comes to self-expression.

“I think one thing about hip-hop is that it’s always been uncensored and unedited in that way, and I think that if you take a lyric and you put it to a look, then it really makes sense,” she said. “(Rappers) say what they want to say and they say it in their way, so why shouldn’t the fashion have the same emotion and the same voice and the same freedom?”