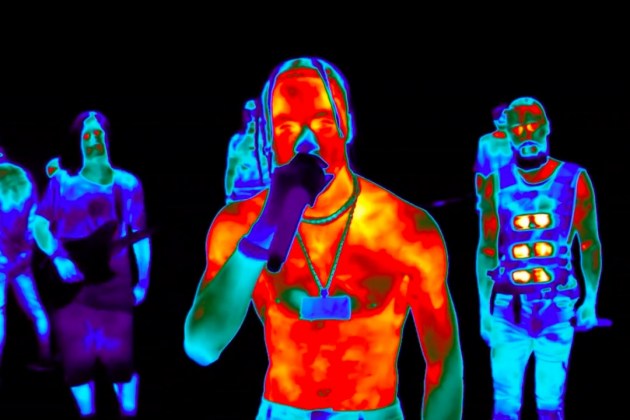 Last night, the electric Travis Scott and Thirty Seconds to Mars took the stage at the 2017 MTV Video Music Awards for a brief, but interesting live mashup of the group’s song, “Walk on Water” and his AstroWorld single, “Butterfly Effect.”

If you were watching the performance on TV, you could see that both Scott and the rock group were filmed through a thermal-imaging camera, so only their colorful silhouettes were showing. For most of the one-song set, the Jared Leto-led group belted out their upbeat new single. At about the two-minute mark, though, Scott pops up and half-croons some lyrics from “Butterfly Effect.”

Other bits of genre-bending fun came when Ed Sheeran began covering Lil Uzi Vert’s “XO Tour Llif3″ just before Uzi himself popped up onstage to join him. Both were just two of several dope moments at the 2017 MTV VMAs, which were as star-studded as ever.

Perhaps the best part of the night, though, was Kendrick Lamar, who turned in insanely dope live renditions of “DNA” and “Humble” to begin the show. It was a fitting start for a guy who would go on to win Video of the Year for the latter single.

Check out Scott’s performance with Thirty Seconds to Mars in the video below, and peep the rap game luminaries who attended the 2017 MTV VMAs in the gallery below that.