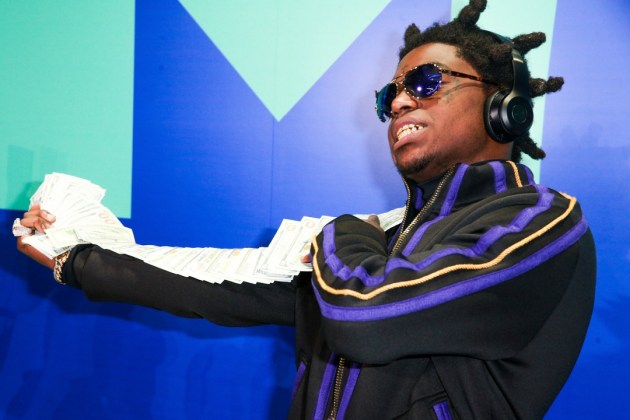 Fresh off dropping Project Baby 2, Kodak Black took a trip to Inglewood, Calif. to attend the 2017 MTV Video Music Awards, where he was nominated for Best New Artist. Lil Kodak didn’t win, but it seems like he managed to have himself a good time.

Hitting MTV’s equivalent of a red carpet, Kodak spread a huge stack of bills across his arm as photographers looked on and snapped their pictures. At one point, Kodak either drops, or flatout tosses his stack to the ground. One woman steps forth to try to scoop up the bills, but Kodak makes it clear he’s not having it and crouches over to pick up his cash.

A little less than three months ago, Kodak was incarcerated in a cell at the Broward County Jail in Florida. He was released in early June and has been on house arrest ever since. While he has been confined to his crib, he is allowed to travel for work purposes, which is why he was allowed to attend the 2017 MTV VMAs.

Kodak’s red carpet flexing was just one of the dope hip-hop moments that took place either shortly before or after the 2017 VMAs. Kendrick Lamar turned in what was probably the performance of the night with inventive live renditions of his hit DAMN. singles “DNA” and “Humble” at the very beginning of the show. He also went on to win Video of the Year.

Watch Kodak act a fool on MTV’s red carpet below.