I Prayed To Gotti: Why ‘American Gangster’ Is JAY-Z’s Hustler Masterpiece 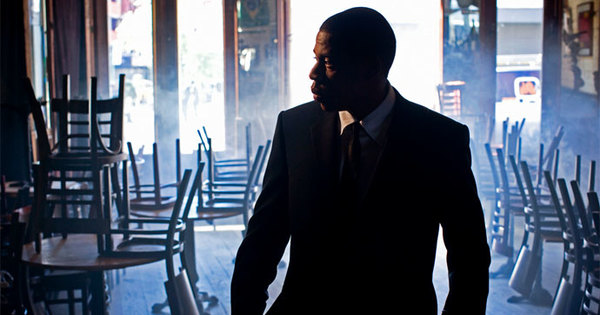 0
0   0
By digging into the darkness of his past, Hov created a drug-dealing epic.

You never forget the imagery of a woman being force-fed dirty dollar bills once hearing “D’Evils.” It’s a gruesome illustration―vividly disgusting―but crossing the line of reality into a scene you would expect to play out in a surrealistic mafia movie.

In a song about corruption and the poison of greed, I’ve always found “I never prayed to God, I prayed to Gotti” to be the most ear-grabbing lyric. A detail so tiny that most rappers would omit the spine-shivering blasphemy, but not Jay. He wanted listeners to know that the only higher power was not the ruler of heaven, it was men who conquered the streets.

Living life by Gotti’s commandments depicts the kind of fellow whose life resembles Tony Montana and not Tony! Toni! Toné! Jay didn’t need to show off Dracos and run off on plugs to make listeners feel the authenticity of his stories, the nuances sprinkled into his lyricism crafted a portrait only Hov could paint. These small, unobtrusive descriptions make Jay’s underworldly depictions feel authentic, creating something real in the most surreal way. Greed, pleasure, and regret all give Reasonable Doubt a pulse, a mafioso album built on more than a persona exaggeration.

This pulse is felt whenever Jay decides to revisit his past as a drug-dealing hustler―rewinding memories instead of constructing fables. I’m skeptical about the 92 bricks, one of Jay’s most questionable legends, but it’s a rare myth in a sea of respected validity.

Rewinding is what occurred when Jigga opened Pusha T’s email containing “Drug Dealers Anonymous,” and his response was perfect. “WTF? Why you taking me to a dark place?” he replied, giving a sense that a chord was struck, a reaction was triggered, or better yet, memories that were buried started to surface. Memories are why American Gangster turned out to be the incredible album Kingdom Come wasn’t; the inescapable past guided Hov to a place he couldn’t tap into when searching for the voice and sound of his prosperous present.

The backstory behind the album: JAY-Z couldn’t watch Denzel Washington portray the legendary Frank Lucas without drawing comparisons to his past life. Inspiration surged through him, a desire to represent the hustler in audio form. Memories of his days dealing drugs are embedded into his mental muscles like riding a bicycle. This was the period in his life when he learned to store all his lyrics without writing them, but he also stored all the unlawful activities that unfolded while he was crafting his style of pad-less writing. Only in hip-hop can the hustler survive the trials and tribulations that are meant to bring his downfall. But Jay went where the previous gangsters and mobsters couldn’t, and being able to look back allowed him to make an ode to the past, present, and future hustlers of America.

Jay has never sounded more alive post-retirement than on “Blue Magic,” American Gangster’s first single. Embedded in his boastful tone and swagger-filled delivery is the elation of a middle-aged man retelling stories from his quarterback glory days. Tapping into dope boy nostalgia, his three verses moonwalk through Reagan-era kitchens and blocks flooded with crack vials, junkies and crooked cops. Hov didn’t sound like a new rapper, but an old one who had found his fire, and the jaunty yet sinister Pharrell production is equally as potent. This was an exciting release, the kind of foreshadowing single that made fans believe the real return of JAY-Z was forthcoming.

“Blue Magic” was an epic teaser, but the entire body of work is what gives American Gangster a lasting place in Jay’s discography. The idea was to build the album around specific scenes of the movie, each song being a different point in the rise and fall that unfolded in the film, but Jay seamlessly weaves his life and the film’s plot together. It reaches a point where even he’s unclear who is who—that’s how close the resemblance is.

“Pray” introduces impeccable storytelling, the genesis of a hustler born due to the poverty of his environment. “American Dreamin’” continues to build around this character, bringing us into the mental tension, fear, and rush of entering into the unlawful life of a corner boy. “Pray” and “American Dreamin’” alone could make for a short story script. This is the dexterous attention to detail that has made many of Hov’s masterpieces.

By “No Hook,” the character vanishes and JAY-Z turns to autobiographical soul-spilling. He sounds possessed, like a switch was pushed, and just vomits all these emotions that have arrested his soul since jumping off the porch. Each line hits, each bar more striking than the last; any hook would’ve disrupted the stream-of-consciousness.

“No Hook” is an example of how Jay’s brilliance ruins the concept but he still attempts to intertwine the film and the album’s concept. Ludacris has nothing to do with selling crack in the ’70s but the line hits so hard it begs for inclusion. Notice how that despite being removed from that life, Jay isn’t distant from the moral code. Continuing with the theme of being more trapper than rapper, the entire first verse of “Roc Boys” is dedicated to the championing of hustler motifs―the connects to the customer, duffle bags and shoe boxes. Over the most elegant horns, he celebrates.

It’s this ecstatic enjoyment that makes the first line in “Sweet” so harrowing: “Still there’s pain, If I would have grew up to be a doctor, my nephew would have grew up to do the same.” He is showing us that he is a role model who knows his imperfect life is both sweet and bitter. He weighs the internal conflict, an inner-plight that is rarely articulated when showcasing the layers and complexity of dealing drugs. All this money and fast living don’t affect just one person―entire families are impacted by the weight of these decisions.

Sounds of ‘70s jazz and soul score the chronicles of the hustler. You feel the dust from the records, a sound that feels old, dated, but like the soul samples that make The Blueprintradiate, the lush bed of sounds adds a necessary coating to American Gangster. Jay couldn’t make a modern-sounding album and deliver views from the crack era.

I never forgave Diddy for his horrendous contributions to In My Lifetime, Vol. 1, but he redeemed himself with the five songs he co-produced with LV & Sean C for American Gangster. Gorgeous instrumentation paired with the dirty dealings unfolding in the underworld is a union Jay hasn’t mastered since. Constructing the album with so much foresight is why it feels like a complete body of work; everything moves in a cohesive flow. There are no sore thumbs or outcast records—“I Know” isn’t completely necessary but it adds a bit of fun before the fall.

“Success” is home to musing with the philosophical Nas, “Ignorant Shit” is home to a blackout tag team with Beans, rap disparagers are berated on “Bad Guy,” and the prison cell closes on the album closer “Fallin’.” Each record reveals a motivated Shawn Carter who uses the surge of inspiration to find the footing fans wanted when he ended his brief retirement.

It wasn’t that Jay lost it, he just needed to find the right subject. This is the heartbeat of American Gangster, the survivalist who lived to tell the tale. A man who can tell you about the grimmest details, the highest highs and the lowest lows, all while being an image of how you can take the hustler’s practice and conquer legal fields with the same mentality.

I understand why Hov doesn’t want to base his entire career on rewinding and reminiscing. He’s progressed beyond that, there’s Basquiats hanging in the kitchen instead of crack hovering over the stove. It’s still a dark place, a world where the pain outweighs the beauty. But pressure makes diamonds, and out of that darkness, he continues to pull out light.

American Gangster is his darkest light since Reasonable Doubt and the best representation of the hustler’s tale.