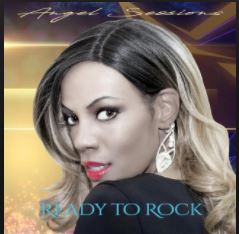 Angel Sessions is nothing short of a superstar that puts the “S” in soul music. Reason we say this is because you can hear how she puts her heart and soul into the music that she creates. She is by far the Michael Jordan of R&B. The world just does not know it yet.
It’s been a great year for Angel from the release of her latest single “Let’s Wait Awhile”, a classic remake from the original hit song by Janet Jackson. The song hit the charts on Amazon peaking at number 5 on its first day of release, for the Best new single. The single gain major exposure on radio stations such as Soul Café Radio, in which Angel also did an interview with hosted by Chris Clay. It was also played on 106.7 Atlanta and other radio stations.  Angel won a President Choice Awards 2020 from Soul Café Radio.Angel quotes, “Fans from around the world listen to my single and some said that it sounded at first like Janet. I performed the record in the style of Janet at the beginning of the first verse to sort of reminding people of the great masterpiece hit single recorded back in 1987 by Miss Janet Jackson than give them a taste of my version as I continue singing it in my own style. I felt so good to hear that people were taken by my version and really enjoy how I remade the song.This song I recorded was to pave the way for this next single I am releasing so that my fans will want to hear more from me, given them good music.” Let’s Wait Awhile streamed over 1 million on SoundCloud and over 69 thousand on Spotify. The new single is a different style by Angel but the same sound, her fans are used to hearing from Angel. On April 23rd Ready to Rock, the new song is now release on all major music online stores and streaming services. The music is written and produced by DeAndre Martin aka Martie Beatz.
Founder Rodney Crews quote, “Our team at Atlas Elite Entertainment, LLC are very excited about this fresh hot new single from “The Legendary First Lady Of AEE” Angel Sessions, just when the fans thought the massive success of her hit remake of the classic Janet Jackson single “Let’s Wait Awhile” was hot, not knowing Angel was just giving them a sample of what’s to come, as she shows off her savvy songwriting and vocals, on this new R&B single, that’s sure to knock your socks off.” Get ready to enjoy another great single by Angel Sessions.

For more updates about Angel Sessions visit her website at http://www.angelsessions.com and see more of what’s in the latest news.

With all that being said, the name of the new single is “Ready To Rock” and it is super saucy. Click the link below to stream it right now.
https://open.spotify.com/album/03P3g6vkipQWUpjJizqh7s