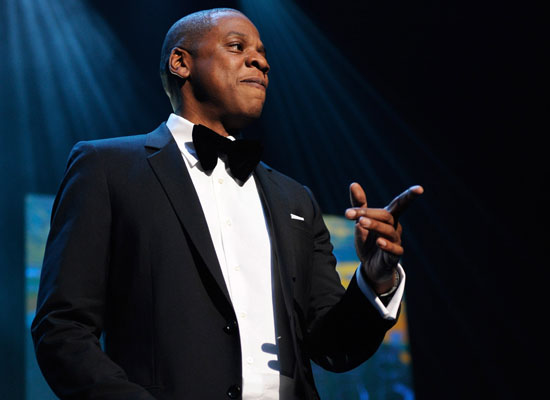 Jay Z became only the second hip-hop star in history to perform a concert at New York’s Carnegie Hall on Monday evening (January 6, 2012). Wyclef Jean graced the stage in 2001, with Stevie Wonder, Eric Clapton and Whitney Houston, and Jay Z brought along a similarly star-studded list of friends for the historic evening.

The veteran rapper performed a selection of his greatest hits, but opened with his latest single ‘Glory’, about his 1-month old daughter with Beyonce, Blue Ivy Carter. Speaking after the song, the Roc Nation boss told the crowd, “I didn’t think I was going to make it through that one.that was tough”. Later in the evening, the hip-hop mogul was joined by fellow New Yorkers Alicia Keys and Nas, while a 30-piece orchestra played in unison with a band that featured The Roots drummer Questlove. Playing to a relatively modest crowd of 2,800, Jay Z certainly made the most of the intimate surroundings and commanded the stage in a black-and-white tuxedo with bowtie and his trademark dark sunglasses. According to the Wall Street Journal, tickets for the event were mainly offered through private sale and ranged in price from $500 to $2,500. The audience was described as being, “mostly men in suits or tuxedos, and women in conservative dresses”. However, all proceeds from the lucrative concert are to be donated to the United Way of New York City and the Shawn Carter Scholarship Foundation, which seeks to help low-income students cover their college costs.