Couple Is Using Sneakers to Say, ‘I Do.’ 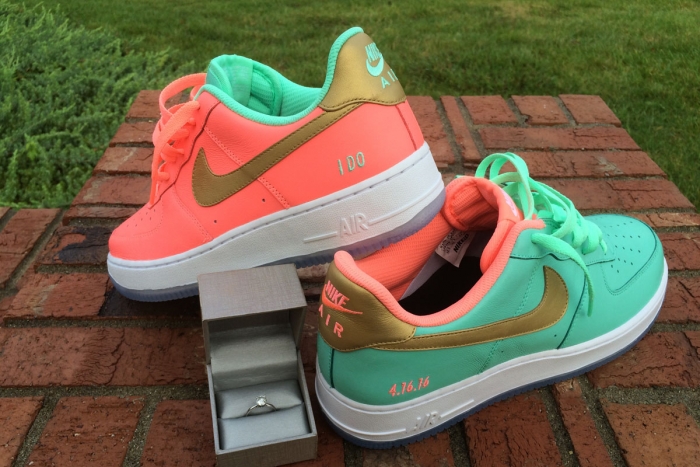 How One Couple Is Using Sneakers to Say, ‘I Do.’

It’s arguably the most important event in a person’s life. The proposal is made, around-the-clock planning sets the stage, and loved ones travel from all over to observe. It’s a wedding day, when two soulmates make a lifetime commitment to each other—for better or worse.

Depending on who’s asked, “worse” for a sneakerhead’s significant other may include dealing with their new spouse’s obsession. No matter which side of the fence they’re on, weddings are typically void of any sneaker-related drama, but there can be exceptions. Over the years, lacing up sneakers instead of traditional dress shoes for the nuptial exchange has become more common, especially among those who collect.

Pat Shelton, aka HYPEBEAST_PAT, is a Tennessee-based graphic designer who also happens to be a sneaker enthusiast. The variety in his lineup is noteworthy, but he’s a Nike Air Force 1 aficionado, and one of the best NIKEiD creators in the game. In between adding pairs to his collection, Shelton fell for his college sweetheart Kayla and popped the big question to her in December 2014. Fortunately for him, his fiancée doesn’t mind his sneaker hobby. In fact, you could even say that she’s supportive. So when he brought up the idea of walking down the aisle in sneakers last year, it wasn’t met with much resistance.

“I think she would’ve been shocked if I didn’t wear sneakers,” he said.

But it won’t just be Shelton keeping it sporty for the April ceremony. In perhaps the biggest sign of solidarity a sneakerhead could ask for, his bride will be joining him in a pair of her own.

Figuring out exactly which shoe they’d be wearing proved to be an easy task—the Air Force 1, which the groom-to-be already owns about 30 custom pairs of. “I think the Air Force 1 is the most iconic shoe Nike has ever designed,” Shelton said. “It has always been special to me.”

Pat’s initial hope was to design bespoke pairs, but the lab was closed for renovations at the time. Plans shifted to seeing what he could style up on on NIKEiD. Pat and Kayla’s wedding colors were available design options for his beloved Air Force 1—a sign that it was meant to be.

“One day I happened to notice that the colors from our wedding were available to use. What were the chances? They were made with the NBA All-Star options from last year that featured the NYC branding and the iridescent material. I didn’t want them to match exactly, so I came up with a his and hers concept. The shoes are the opposites of each other in colorblocking, except for the Swoosh.”

The collaboration between the two will match the couple’s wedding day attire, when Pat plans on wearing a grey tuxedo with mint green details. Aware that sneakers can sometimes look odd with formal wear, he will also be bringing a regular pair of dress shoes, for photos, as a compromise. But when the vows are exchanged, it will be in the Air Force 1s.

After mocking up the designs, there was a standard 3-4 week wait for shipping. When the shoes arrived, their significance became more apparent than ever.

“Reality didn’t set in until we opened the boxes and said, ‘Wow, this is really happening,'” Shelton recalled. “Also, having the ‘I DO’ and ‘4.16.16’ on the sides made them even more special.”

As for what will become of the custom shoes after the couple gets hitched, Pat says, “She and I will discuss that after the honeymoon.”