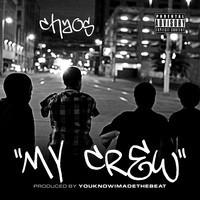 To follow-up the release of his DJ Big Tiny-hosted Never Change mixtape, which impacted just over a month ago and featured “Hate If You Wanna” featuring Troy Ave, Newark rapper Chaos resurfaces with some appreciation for his squad. “My Crew” is an anthem that showcases Chaos’ love for his city, especially the people that have been around him and stayed down since the beginning. You can expect accompanying visuals for the YouKnowIMadeTheBeat-produced single in the near future!