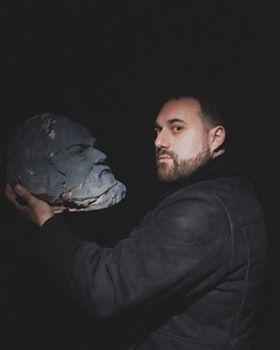 1. How long have you been creating music and how does it make you feel after creating a record?

My first solo work came out in 2004. Every record is a snapshot of an era of my life – so i do not disown any of my work.

2. Ceschi Ramos, what does your name mean and how did you come up with your name?

My full name is Julio Francesco Ramos – my mother just always called me Ceschi (chesskey) as short for Francesco.

3. How has your environment effected the music that you create?

Deeply. I grew up in many places. Born in Jersey moved to Decatur Georgia. Stints in Argentina & Spain. In the late 80s my family moved to the border of Berkeley & Oakland California. I was one of 3 non-black students in my class. I am of Puerto Rican & Italian descent. Hip hop was just something that came very naturally to me – something we discovered in the Cross Colours era by buying rap tapes at the Ashby Flea Market amidst drum circles, Malcolm X t-shirts & chew sticks. In Berkeley we also were introduced young to a vibrant punk rock scene spearheaded by the 924 Gilman St. Venue. Along with my strong cultural background – this is the type of environment that created me. I moved to the east coast – to New Haven CT as a young teen – still going back to the west coast each summer to visit our Papi. East coast introduced us to hardcore & the variety of Hip Hop such as Wu & BCC. Also the margins of street culture, and my experiences navigating within it helped form me.

4. Talk about “Say No More” and how that record come about?

Say No More is a record written for two of my best friends who are currently facing 10 years federally on a large scale marijuana conspiracy charge. I wrote it during a tumultuous time after one of our little homies – our partner’s cousin – was shot & killed over a half pound in New Haven. And then feds busted a bunch of really standup, good people due to the snitching efforts of some scumbags.

In the end it is also a song about trying to seek comfort during the darkest moments of life.

5. What do you feel “Say No More” will bring different to the music industry, that is not already there?

Authenticity – i promise you I’ve probably seen & did more than half these “street” rappers – even i don’t always need to talk about it.
Uniqueness – I’m not just a rapper, not just a guitarist, not just a singer, not just a poet, not just a philosopher – i really live & encompass all of it. Say No More is just one taste.

Over. I plan to end Ceschi as a brand. I would rather be a mysterious Andre Benjamin than a washed up 50 year old “rap god”.