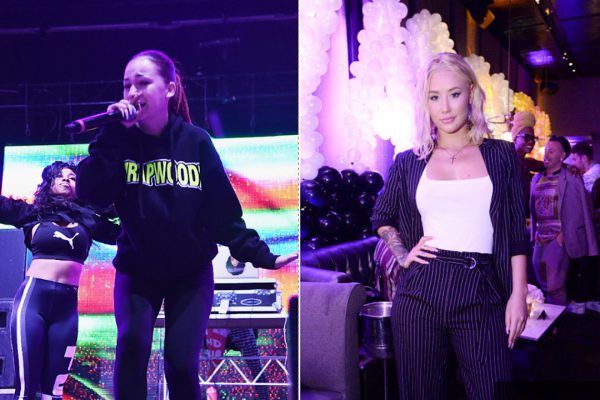 The feud between Bhad Bhabie and Iggy Azalea is all the way on. Last night (Nov. 14), just five or so days after the two had a brief back-and-forth on Instagram, the 15-year-old viral sensation and rising rapper caused some drama at Cardi B‘s Fashion Nova event when she chucked a drink at Azalea. In an Instagram story, the “Black Widow” rapper is seen fixing her wet hair and laughing at the situation.

“What kind of Jerry Springer…? What kind of ‘who’s baby is this’ Dr. Phil ass shit? Oh, my God. I am a grown-up. I cannot,” Iggy said in the video. In her caption, Azalea was completely unbothered by what happened and went back to her regularly scheduled turn-up.

“So the Dr. Phil girl is really upset about me apparently and thought I’d fight a child?!” she said. “LOL anyway! The fashion Nova party is LIT!”

Bhad Bhabie, who was born Danielle Bregoli, also addressed the drama on her own Instagram account. Although she didn’t post videos about the situation, the “Gucci Flip Flops” artist did reveal why she targeted Azalea.

“Bye broke bich,” Bhad Bhabie wrote. “Bye hoe. Glad u left wit a bag cuz u certainly ain’t making no money from music anymore. It’s simple. Don’t talk all sorts of s–t on the internet n come up to me like u my friend. Some of these hoes like u fake n 2 faced as f–k vbut I’m NOT that bich.”

After leaving the party, the Survive the Summer rapper explained her side of the story in a few tweets.

“I literally was standing there taking pictures wide open no security. Felt water thrown on my wig,” Iggy wrote. “Turned around and saw all these people scuffling and screaming – I thought there was a fight in that section. I was confused as f–k about what was going on. Then some fat girl started yelling and my friend raven jumped over a sofa and was tryna fight that fat girl. I saw some red hair and saw it was the Dr Phil girl. I couldn’t hear a thing she said it’s a club and she was far. Then I stood there and was like ‘Nah I’m not leaving from right here until she is removed.’ The security escorted her out. She logged on to the gram from the parking lot I guess to claim her clout for what I don’t know. I stayed and enjoyed the night.”

Check out videos from Bhad Bhabie and Iggy Azalea’s spat below.