Zimmerman Is Acquitted in Killing of Trayvon Martin 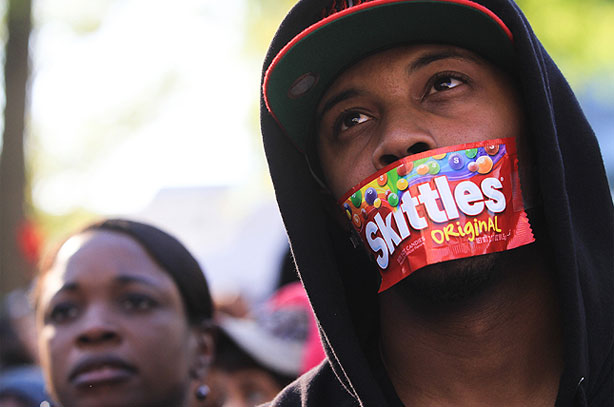 After three weeks of testimony, the six-woman jury rejected the prosecution’s contention that Mr. Zimmerman had deliberately pursued Mr. Martin because he assumed the hoodie-clad teenager was a criminal and instigated the fight that led to his death.

Mr. Zimmerman said he shot Mr. Martin on Feb. 26, 2012, in self-defense after the teenager knocked him to the ground, punched him and slammed his head repeatedly against the sidewalk. In finding him not guilty of murder or manslaughter, the jury agreed that Mr. Zimmerman could have been justified in shooting Mr. Martin because he feared great bodily harm or death.

The jury, which had been sequestered since June 24, deliberated 16 hours and 20 minutes over two days. The six female jurors entered the quiet, tense courtroom, several looking exhausted, their faces drawn and grim. After the verdict was read, each assented, one by one, quietly, their agreement with the verdict.

The case began in the small city of Sanford as a routine homicide but soon evolved into a civil rights cause examining racial profiling and its consequences — an issue barred from the courtroom — and setting off a broad discussion of race relations in America. Mr. Martin, with his gray hooded sweatshirt and his Skittles — the candy he was carrying — became its catalyst.

Even President Obama weighed in a month after the shooting, expressing sympathy for Mr. Martin’s family and urging a thorough investigation. “If I had a son,” Mr. Obama said, “he’d look like Trayvon.”

Saturday night when the verdict was read, Mr. Zimmerman, 29, smiled slightly. His wife, Shellie, and several of his friends wept, and his parents kissed and embraced.

Sybrina Fulton and Tracy Martin, who lost their son a few weeks after his 17th birthday, were not in the courtroom. In a statement released early Sunday, their attorney, Benjamin Crump, said the family was heartbroken, and that they thanked people around the world for their support.

“Trayvon Martin will forever remain in the annals of history next to Medgar Evers and Emmett Till,” he said, “as symbols for the fight for equal justice for all.”

After the verdict, Judge Debra S. Nelson of Seminole County Court, told Mr. Zimmerman, who has been in hiding and wears a bulletproof vest outside, that his bond was released and his GPS monitor would be cut off. “You have no further business with the court,” she said.

Outside the courthouse, perhaps a hundred protesters who had been gathering through the night, their numbers building as the hours passed, began pumping their fists in the air, waving placards and chanting, “No justice, no peace!” Sheriff’s deputies lined up inside the courthouse, watching the crowd, who were chanting peacefully, but intently.

By 11:20, more than an hour after the verdict had been read, the crowd outside the courtroom had begun to dwindle; fists were no longer aloft, placards had come down.

Mark O’Mara, one of Mr. Zimmerman’s lawyers, said, “George Zimmerman was never guilty of anything except firing the gun in self-defense.”

In a news conference following the verdict, Angela B. Corey, the state attorney who brought the charges, rebuffed the suggestion that her office overcharged Mr. Zimmerman.

“We charged what we had based on the facts of the case,” she said. “We truly believe the mind-set of George Zimmerman and the reason he was doing what he did fit the bill for second-degree murder.”

Calling it a “very trying time,” Mr. Crump said he had urged Mr. Martin’s parents to stay out of the courtroom for the verdict. They were home and planning to attend church on Sunday.

“Whatever the Zimmerman verdict is,” Mr. Crump read, “in the words of my father, we must conduct ourselves on the higher plane of dignity and discipline.”

Sanford’s new police chief, Cecil E. Smith, was in the courtroom for the verdict, and said afterward that while many calls were coming in from worried residents, the downtown was open and neighborhoods were calm.

Still, there was anger over the verdict. “We are outraged and heartbroken over today’s verdict,” said Benjamin Todd Jealous, president of the N.A.A.C.P. “We stand with Trayvon’s family and we are called to act. We will pursue civil rights charges with the Department of Justice, we will continue to fight for the removal of Stand Your Ground laws in every state, and we will not rest until racial profiling in all its forms is outlawed.”

Mr. O’Mara disputed the notion that Mr. Zimmerman engaged in racial profiling. “His history was not as a racist,” he said.

And while defense lawyers were elated with the verdict, they also expressed anger that Mr. Zimmerman spent 16 months filled with fear and trauma when all he was doing was defending himself.

“The prosecution of George Zimmerman was a disgrace,” said Don West, one of Mr. Zimmerman’s lawyers. “I am thrilled that this jury kept this tragedy from become a travesty.”

The shooting brought attention to Florida’s expansive self-defense laws. The laws allow someone with a reasonable fear of great bodily harm or death to use lethal force, even if retreating from danger is an option. In court, the gunman is given the benefit of the doubt.

The public outcry began after the police initially decided not to arrest Mr. Zimmerman, who is half-Peruvian, as they investigated the shooting. Mr. Martin, 17, had no criminal record and was on a snack run, returning to the house where he was staying as a guest.

Six weeks later, Mr. Zimmerman was arrested, but only after civil rights leaders championed the case and demonstrators, many wearing hoodies, marched in Sanford, Miami and elsewhere to demand action.

“Justice for Trayvon!” they shouted.

The pressure prompted Gov. Rick Scott of Florida to remove local prosecutors from the case and appoint Ms. Corey, from Jacksonville. She ultimately charged Mr. Zimmerman with second-degree murder. The tumult also led to the firing of the Sanford police chief.

Through it all, Mr. Martin’s parents said they sought one thing: That Mr. Zimmerman have his day in court.

From the start of the trial, prosecutors faced a difficult task in proving second-degree murder. That charge required Mr. Zimmerman to have evinced a “depraved mind,” brimming with ill will, hatred, spite or evil intent, when he shot Mr. Martin.

Manslaughter, which under Florida law is typically added as a lesser charge if either side requests it, was a lower bar. Jurors needed to decide only that Mr. Zimmerman put himself in a situation that culminated in Mr. Martin’s death.

But because of Florida’s laws, prosecutors had to persuade jurors beyond a reasonable doubt that Mr. Zimmerman did not act in self-defense. A shortage of evidence in the case made that a high hurdle, legal experts said.

Even after three weeks of testimony, the fight between Mr. Martin and Mr. Zimmerman on that rainy night was a muddle, fodder for reasonable doubt. It remained unclear who had started it, who screamed for help, who threw the first punch and at what point Mr. Zimmerman drew his gun. There were no witnesses to the shooting.

The state presented a case that was strong on guesswork and emotion but weak on evidence and proof, Mr. O’Mara said.

“Don’t connect those dots unless they are connected for you, beyond a reasonable doubt, by the state,” he urged the jury.

In the end, prosecutors were left with Mr. Zimmerman’s version of events.

The defense also had one piece of irrefutable evidence, photographs of Mr. Zimmerman’s injuries — a bloody nose along with lumps and two cuts on his head. It indicated that there had been a fight and that Mr. Zimmerman had been harmed, and the defense showed them to the jury at every opportunity.

Prosecutors built their case around Mr. Zimmerman’s persona — a “wannabe cop” — his wrong assumptions and his words.

Mr. Zimmerman, they said, was so concerned about burglaries in his townhouse complex that when he spotted Mr. Martin, an unfamiliar face in the rain, he immediately “profiled” him as a criminal. He picked up his phone and reported him to the police.

Then he made the first in a string of bad choices, they said. He got out of the car with a gun on his waist; he disregarded a police dispatcher’s advice not to follow Mr. Martin and he chased the teenager, engaged in a fight and shot him in the heart.

To stave off an arrest, he lied to the police, prosecutors said, embellishing his story to try to flesh out his self-defense claim.

“Punks,” Mr. Zimmerman said to the police dispatcher after he spotted Mr. Martin, adding a profanity. “They always get away,” he said at another point in the conversation, a reference to would-be burglars.

On these words, prosecutors hung their case of ill will, hatred and spite toward Mr. Martin.

“This defendant was sick and tired of it,” Bernie de la Rionda, the chief prosecutor, said in his closing statement. “He was going to be what he wanted to be — a police officer.”

But no one saw the shooting; witnesses saw and heard only parts of the struggle, and provided conflicting accounts.

And there was not a “shred of evidence” that Mr. Zimmerman was not returning to his car when Mr. Martin “pounced,” defense lawyers said.

The prosecution’s witnesses did not always help their case. Rachel Jeantel, the 19-year-old who was talking with Mr. Martin on his cellphone shortly before he was shot, proved problematic. Her testimony was critical for the prosecution because she said that Mr. Martin was being followed by Mr. Zimmerman — a “creepy-ass cracker,” he called him — and that he was scared.

But Ms. Jeantel might have damaged her credibility by acknowledging she had lied about her age and why she did not attend Mr. Martin’s wake. She also testified that she softened her initial account of her chat with Mr. Martin for fear of upsetting Ms. Fulton, who sat next to her, weeping, during Ms. Jeantel’s first interview with prosecutors.

Prosecutors also were not helped by the police and crime scene technicians, who made some mistakes in the case. Mr. Martin’s sweatshirt, for example, was improperly bagged, which might have degraded DNA evidence.

Still, prosecutors had emotion on their side — the heart-wrenching narrative of a teenager “minding his own business” who was gunned down as he walked home with a pocketful of Skittles and a fruit drink.

Through it all, though, the defense chipped away at the prosecution’s case. The resident with the best vantage point of the fight described a “ground and pound” fight, with a person in red or a light color on the bottom. Mr. Zimmerman wore a reddish jacket.

And a prominent forensic pathologist who is an expert in gunshot wounds testified that the trajectory of the bullet was consistent with Mr. Martin leaning over Mr. Zimmerman when the gun was fired.

“Let him go back,” Mr. O’Mara said to the jury, referring to Mr. Zimmerman, “and get back to his life.”

On Saturday, the jury did just that.