A recent Instagram post from Maybach Music Group rapper Wale has put him at odds with fans who seemingly failed to recognize his African heritage and instead misinterpreted his intent.

Wale and his girlfriend Chloe Alexis were celebrating their daughter Zyla Moon’s first birthday when he posted a video of money being showered upon her, a Nigerian cultural practice symbolizing good fortune.

Text on the video noted they were celebrating the Nigerian way, which was denoted by the country’s flag.

My baby girl was Littt yesterday at her party this is her and big cousin Izzy goin ham to “fine girl”shout my the real first family @mrtonylewisjr n @simplyjess120 we love PS “Soso n Zy” are the life of the party ..#KemiTurns1

The cultural significance was lost on countless Instagram users who seemed to suggest that the act was inappropriate.

One user noted, “It’s like they’re getting her ready for her future career, just need the stripper pole.” Another posted, “What do you think about the negative message that the girls will learn at an early age … shit, one little girl already knew what to do with the money, making it rain and picking it up.”

On the flip side, several others — including Wale — reminded fellow social media users that this was, in fact, a Nigerian tradition. But with such an active comment stream, posts became buried as fast people could write them.

One particular user who said, “Have some class … showering her with dirty bills ain’t a good look if you know what I mean,” which prompted a response from Zyla’s aunt.

“Zyla moon is my niece, she’s a very special, intelligent, charismatic, and sweet one-year-old … her mother would never let her be subject to anything harmful or degrading in any way,” she said, while adding (again) it’s a cultural tradition.

Another user commented, “You fake bruh … now you hardcore repping Nigeria, ugh.” This points an underlying lack of knowledge about Wale’s cultural background, which led to a heated exchange with vlogger Anthony Fantano back in May.

Fantano, who seemingly hated Wale’s latest album, Shine, took particular issue with the song “My Love” and accused Wale of capitalizing on the “Caribbean craze.” This prompted a response from Wale who questioned Fantano’s right to tell an African what African music “should” sound like. 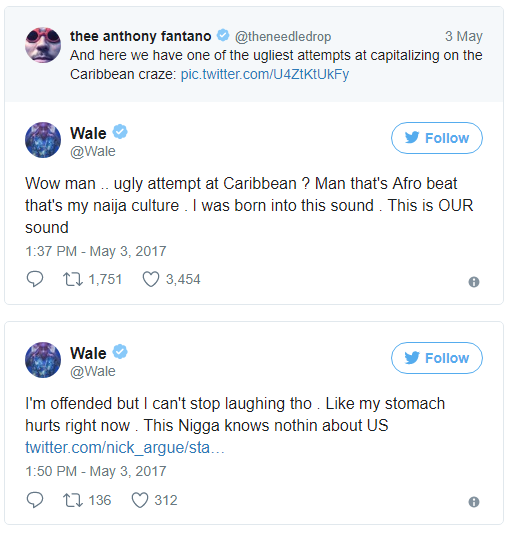