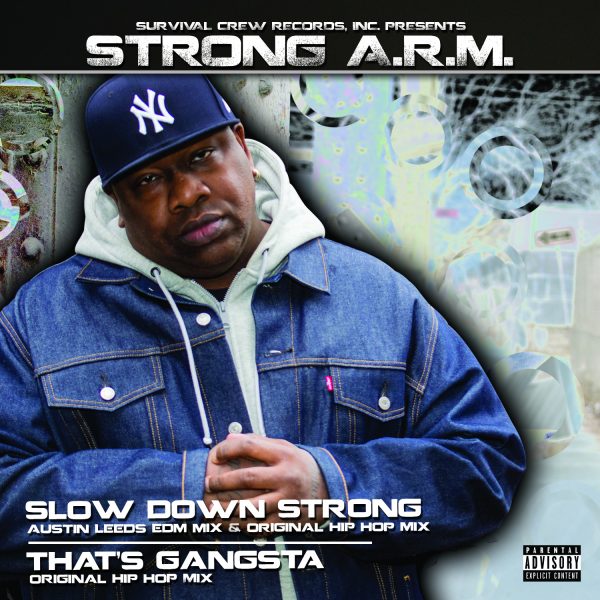 As an original member of The Survival Crew, the acoustically-sound lyricist Strong A.R.M. not only represents the next evolutionary stage in the game of rap music but fosters a style that is able to inject new hood vernacular into the streets. Based out of Brownsville, Brooklyn, the veteran emcee has cultivated his craft to the point where his flow and versatility appear effortless.

Strong A.R.M.’s latest offering is titled Slow Down Strong / That’s Gangsta released by Survival Crew Records Inc. The track is a perfect example of his creative fusion of Gangsta Rap and EDM. It’s a brilliant soundscape and in many ways has created a virtual atmosphere for the lyricism of such caliber. Slow Down Strong / That’s Gangsta turns out to be a double single/EP that includes several remixes and instrumental versions of the two tracks.

The Original Hip Hop Mix of Slow Down Strong is equally impressive and will definitely keep listeners on the repeat key. It doesn’t get any better than the thrilling hardcore rap purists’ street episodes that Strong A.R.M. is able to paint in this hood extravaganza. Both versions of Slow Down Strong come with an instrumental track that reveals the framework behind the production.

The second single featured on the project is That’s Gangsta. The track sparkles with a hard, but exotic beat that immediately keeps us captivated and hooked on the wordplay. That’s Gangsta possesses a riveting bassline and drums. Strong A.R.M. keeps the survival of the fittest at the foreground of his rhyme. The singles Slow Down Strong and That’s Gangsta are promising signs that Strong A.R.M.’s reinvention of gangsta rap is bound to keep the streets percolating.