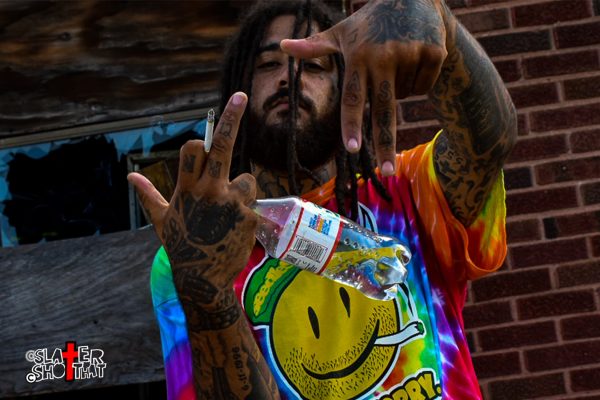 If you haven’t heard of the upcoming rapper, Slater17k, here’s your introduction. After his release from prison in February, he seems to be going harder than ever with a twist. Prior to going to prison, every single video he would release would have guns. Lots of guns especially in his “Get Silly” Remix, where he’s eating a cheeseburger getting a blow job. Since he’s been released from the Illinois Department of Corrections with a 1-year parole sentence attached to his time, it seems now he’s playing it safe. He has dropped 3 new videos since coming home and the only guns you will see anywhere around him, are Nerf guns. Still keeping the street element in his videos he has to follow the guidelines of his parole. That leads us to his latest video titled, “Smoke A Opp”. Slater’s hard-hitting punchlines and metaphors about gang violence and drug dealing are contrasted by an unusual character he portrays. Dressed as an out-of-work clown, Slater delivers bar after bar. All in the meantime he pours ranch dressing on an awaiting female. Slater has 2 albums out and on his Instagram, he has been seen promoting a “Scumbag Slater” album or mixtape that will be available soon. In conclusion, Slater17k is somebody you should definitely look into if you haven’t already. “That leads us to his latest video titled, “Smoke A Opp” shot by @berealbehumble”

“Smoke A Opp” shot by @BeRealBeHumble.