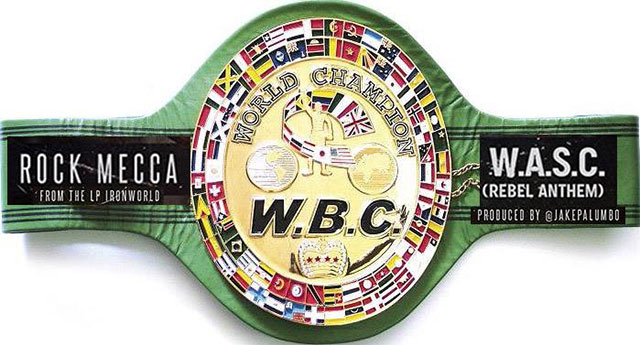 Rock Mecca Returns! One of Hip-Hop’s rising stars is back with the first single from his anticipated sophomore release, “Ironworld”. The single is called “W.A.S.C. (Rebel Anthem) and it’s an instant classic of raw aggression, rarely seen in this era of watered down rap.

Tennessee by way of Brooklyn producer Jake Palumbo provides the high octane instrumental and the scratch cuts on a track sure to blow up on mixtapes, mix shows and on the streets.

This is the track to blast in your car and to turn all the way up in your headphones, a surefire rebel’s anthem. The track has already started to cause commotion with DJS and industry insiders, and eyes are now beginning to turn to the Queens rapper as one to watch this year. Make sure to download, share, like, tweet and re-tweet, and spread the word about what is sure to be an incredible project from Rock Mecca.

“W.A.S.C.”, an acronym for Winner And Still Champion, is the first single from Rock Mecca’s upcoming release “Ironworld”.