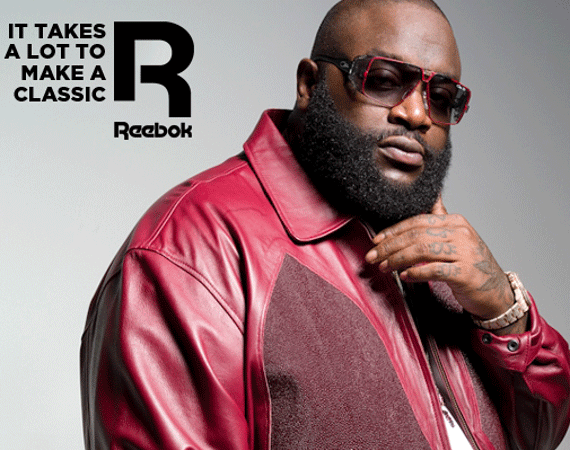 Gots to be more careful! After the drop of Rick Ross verse on Rocko’s U.O.E.N.O track, there was one lyric that didn’t go over too well. “Put molly all in her champagne, she ain’t even know it – I took her home and enjoyed that, she ain’t even know it”… Now we all know what that sounds like. Let’s be real for moment, date rape. I am not saying that Rick Ross rapes women or believes that it is okey to do so, but an artist is a reflection on the content that they put out.
Shortly after the drop Ross has been getting scrutenized from every which direction. Rocko himself even removed him from the song. I’m highly confused, did Rocko and his producers not listen to Ross verse before the track was dropped?! Now that it’s getting heated, they want to take his verse off…and I’m just going to leave it at that.
Now Reebok responded to the controversy by dropping Rick Ross and his endorsement. Today in an interview with TMZ Reebok stated: “Reebok holds our partners to a high standard, and we expect them to live up to the values of our brand…Unfortunately, Rick Ross has failed to do so. While we do not believe that Rick Ross condones sexual assault, we are very disappointed he has yet to display an understanding of the seriousness of this issue or an appropriate level of remorse.”
The apologies made via twitter just wasn’t enough. This should be a wake-up call to artists to watch what you say in your lyrics. Keep in mind your morals and what it is that you stand for. Don’t ever say anything that questions your morale.