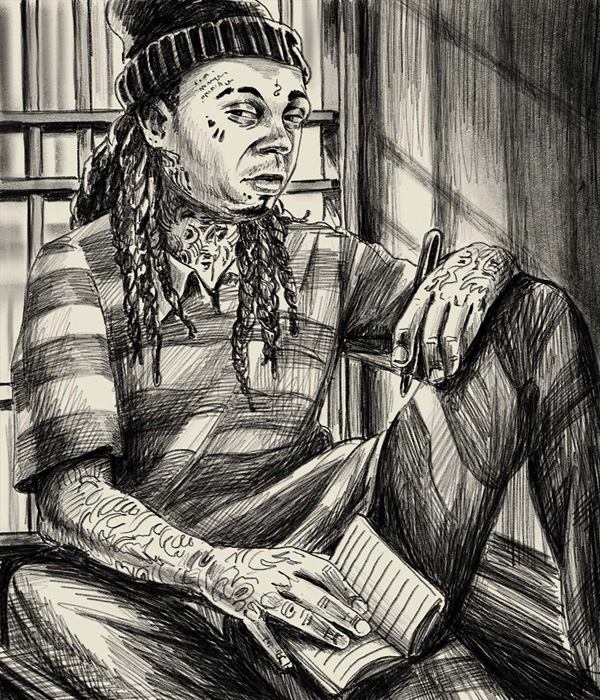 On October 11th Lil Wayne will release his next project: a tale chronicling his eight-month stink in prison, Gone ‘Til November: A Journal of Rikers Island.

Written by way while he was serving out his sentence after pleading guilty to attempted criminal possession of a weapon in 2010, a fewwild stories about “marrying” off inmates and treating bottles of Gatorade like Ace Of Spades have been revealed. Now, and extended excerpt has been revealed via Vulture.

Read some choice pieces, including the infamous tale of when Wayne discovered that Drake had messed around with Wayne’s then-girlfriend, below.

First day in the Feds

As soon as I sat down in the captain’s office, his exact first words to me were, “Don’t f**k with my staff!” Damn! Definitely won’t be getting any celebrity treatment from the captain. The whole conversation was him telling me, “Don’t come in here trying to be what you are. You’re not gonna ‘Lil Wayne’ up this mothaf**ka!”

I wasn’t in the mood to do much socializing, so I kept the first-day meet and greet short. I guess not everybody on staff got the captain’s memo because two C.O.’s were suspended for trying to come up and see me… females of course. Maybe there will be some female groupies in the b***h after all.

Now, as far as the C.O.’s, there’s one who really stood out. White dude. He’s loud, funny, and mad cool. He kept it so real with me from the jump, like, “Stay away from all these b***h-ass n****s… none of them are your friends.” Him being a C.O., he knew why everybody was up in this b***h. Let’s just say that he pointed out all the dudes who became gangstas mysteriously overnight when they found out that I was coming… haha!

Shot hoops with Al in the yard. I sucked. He was much better and he’s 57! No sooner when I got back to the cell at 2:45 p.m., I was back out to take the test for the suicidal-protection aide job. I passed with a 100, no lie. Guess I still got it. And I guess I still get that moola, baby, because SPA is the highest-paying job an inmate can get. The job is basically to monitor the tier for an eight-hour shift and if someone wants to hang up (meaning to kill themselves), to not negotiate with them or try to talk them out of it, but just to alert an officer. Yeah, it’s that real.

Drizzy, he smashed the homie

I woke up still feeling f***ed up about the f***ed-up day that I had. Hell is what it was! I’m used to arguing with my girl on a daily basis, but finding out that she f***ed Drake was the absolute worst thing I could’ve found out.

As a man, honestly, that shit hurt, and not because it was Drake. It could’ve been any man and it would’ve hurt the same. She said it happened way before we got together, but she just never told me. When Drizzy came to see me, he was like, “Yeah it’s true … don’t f**k with her like that ’cause I did f**k her.” Damn!

This is the type of sh*t that a man never wants to find out while he’s locked up. Or maybe so, ’cause only God knows what I would’ve done if I wasn’t locked up right now. As soon as I found out, I told them to just lock me in, and I’ve basically just been by myself in my cell for the last couple of days.