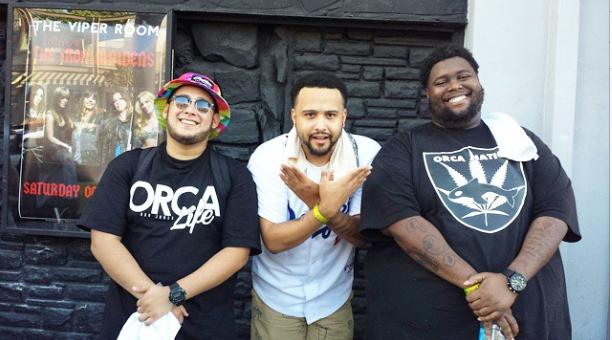 Inland Empire, California rapper/producers Noa James and Curtiss King present the PTJ x Witcho-directed music video for “Move On”, a single from their new album Pterodactyl Jones, out now on California rapper Murs’ 3:16 imprint. Curtiss has produced tracks for Murs, Ab-Soul and Glasses Malone and Noa has several albums out. “‘Move On'” is a very personal song for the both of us,” explains Curtiss. “Noa and I have gone through a lot of transitions since we left our last label. And it’s like no matter how much good you do, no matter how much you help folks, no matter how much you succeed, there’s always that one person that wants to obsess over the negative. We made this song for folks who are ready to move on from the stink and embark on new journeys.” Pterodactyl Jones is out now on iTunes.

We had a opportunity to sit down with Pterodactyl Jones (Noa James x Curtiss King) and find out the “California Way Of Life”.

Do you prefer performing or recording? Why?

CURTISS: I prefer performing because with me it’s all about the people. I can record a million songs and think I’m the most amazing thing since sliced bread, but if I don’t evoke emotions or strike a chord with my audience, who am I truly doing this for? I speak for folks with amazing views and opinions about the world, but are too shy or even afraid to speak up. I speak for the young entrepreneur that wants his life to be anything but mundane. Performing and connecting with these people gives me life.

NOA: I prefer performing. There’s nothing like it. Just being in that zone and the transfer of energy from me to the crowd and vice versa is addicting. I love connecting with people. I get to show you how passionate I am about this and what I’m saying. I love telling my DJ to stop the beat so I can rap an acapella with no mic. Performing has contributed to my health, it has helped me get into shape. I used to be 600 lbs and I wasn’t going to let that hinder my performance.

Do you guys each remember the moment you first heard a rap song? Which song was it and where?

CURTISS: The earliest memory I have of a rap song was my mom playing Digable Planets’ “Rebirth of Slick (Cool Like Dat)” on a cassette tape in her tan Honda. I remember the car freshener she had was Hawaiian flavored. The combination of the music, the mid-day after-school vibes and that song made me fall in love with Hip Hop.

NOA: The most clear memory I have is in 1997. My grandfather had just passed away in 1996. It was a tough time for me. My grandmother gave me a Crown Royal velvet bag filled with coins that totaled to about $150. I went to the local record store and bought one CD, Wu-Tang Forever. That album helped me get through a lot. I listened to it continuously and bought it four more times after that. It was crazy how this music was healing me. I couldn’t understand it but I embraced it. Thinking about it now, I think I was so attached to it because it was the first thing I bought with the coins that were actually my grandfather’s.

How do you guys feel about the way your careers are going so far?

CURTISS: It’s been a beautiful struggle and I’ve loved every minute of it, but I’m not content. I’m my harshest, most unforgiving critic, so I constantly believe I can do better. I’ve toured the US, my music has made people smile and cry, and I’m living off of my music. I have no complaints, just goals I need to check off one at a time.

NOA: I feel great about it. With my family, a lot of dreams don’t come true because they never pursued them, so it is a little surprising for me. I started as a super-underground narrow-minded artist. Now I’m an artist who’s more open-minded and open-hearted. That transition has helped my career become what it is and will help my career flourish even more. I know I’ll be doing something great in this industry. I’m addicted to accomplishing goals and progressing, but it’s still humbling when I receive the love and opportunities I get.

What do you think defines the West Coast rap sound today?

CURTISS: West coast rap is as real, feel-good, and funk influenced as it’s always been. I think a lot more artists are taking notes from what other artists have been doing in other regions of the US. I love that we’re all allowing space for each other to expand and ride down our own lanes.

NOA: Effortlessness, open beats, bounce. It’s like a wavy funk. Over the years, our flow out here has become sharper. We also have this nostalgic sound to us too. Our sound could actually be defined by our weather. It’s always sunny out here, even when it’s cold. The sun is vibrant and comforting. It sets our mood which reflects in our sound.

Tell us about your new album.

NOA: The album is fun. It’s feelings. You have two totally opposite artists coming together as one and being open-minded to each other’s ideas. The producers on the project are close friends of ours: OhGoshLeotus, Captain, Nabeyin & Da Flatlynerz. They want us to succeed and we want them to succeed too. The project sounds like a group of friends working together with a common goal of putting out a great album.