Prince Harvey Recorded His Album in an Apple Store 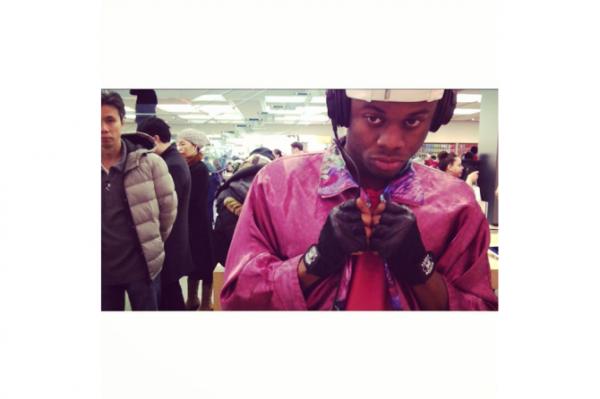 After rapper Prince Harvey found himself in a stump when he had no way of recording his new album, he used an Apple store in SoHo area in New York City to finish recording his LP. The Daily Beast caught up with the young artist, who explained how he was able to pull the stunt off in the first place.

“It wasn’t my plan to record this at the Apple Store. First, my computer died. Then my external [hard drive] died,” he explains. “New York is expensive. I couldn’t just buy another laptop. I just thought, ‘I’m going to die before anyone knows I’m hot.’” The final straw was when Harvey’s hard drive that contained all of his work was stolen. He realized he needed to step up big time if the record was ever going to be completed. Harvey headed to the Apple store where he finished recording the vocals and backing instrumentals for the album. He sang, hummed and rapped into a display computer at the SoHo Apple Store five days a week for four months straight. The album is called PHATASS, an acronym for Prince Harvey At The Apple Store: SoHo.

Apple stores clear the display computers’ memory at midnight, but Prince was able to avoid this by storing his files in the trash bin on the laptops. He would also back up files on thumb files just in case. Thankfully, Harvey had the assistance of two employees, who he said would bend rules to help him out.

Despite monetary hardships and being evicted from his Brooklyn apartment, Harvey never lost hope. ”Poor is a mentality,” he said. “I mean, I can be broke—no money in my pocket—but I’ve never been poor. I’ve been rich my whole life. But I do want money. I want to tour. I want to perform for different people. I’m just a creator. I want to inspire other people to create—show them that you don’t need all these things to be successful.”

PHATASS drops July 26. You can check out his SoundCloud page here.

Source: Prince Harvey Recorded His Album in an Apple Store