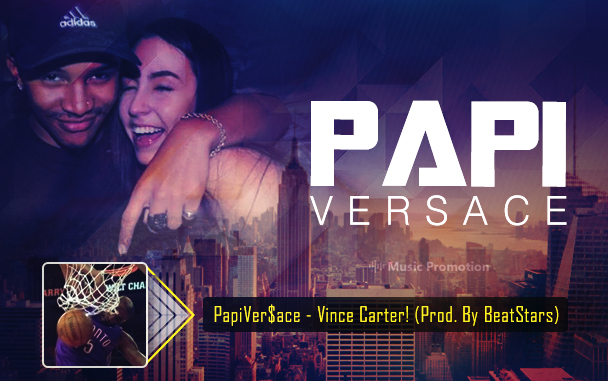 Papi Versace’s classic composition “Vince Carter” continues to be on the top on SoundCloud. Produced by BeatStars the track truly delivers a significant message.

Every music piece is an outcome of inspiration and experience. There is a motive behind the art piece of a composer no matter it is a vibrant genre like hip hop or extremely entertaining like pop music.  An exemplary music genre to support the above statement is hip hop and rap music that is mostly the reflection of an artist’s past experience, his life journey and anything associated with youth culture.

Hip hop and rap music is a genre that does not always deal with “feel good” themes and even give much importance to superficial elements. It is tough and real yet evokes emotion despite being the core music of every party and clubs. With the fire of the genre is getting fiercer with the entry of new artists in the scene, aspiring artist like Papi Versace is taking the art form to the next level. His track “Vince Carter” available on SoundCloud is the main reason for his swarming popularity.

Also known by Brain Moragne, Papi hails from New Jersey, one of the hotspots of hip hop and rap music where he has grown in close connection with the vibrancy of the music and culture. With time he took all necessary steps to nurture his skills in music and later moved to Oklahoma City where he began his professional career. He worked with many artists and producer to enhance his professional circle and made his official debut on SoundCloud with “U Aint Ready”, a superb trap instrumental. Soon Papi kept on dropping more singles based on trap as well and hip hop. Papi Versace also revealed his production genius in many of his compositions on the SoundCloud gala.

The one track that has settled his position in the music landscape is “Vince Carter”. The track is a blend of old-school hip hop powered with steady grooving beats. He uses vivid metaphors that resemble the street life freestyle rapping. He has titled the track in the name of the best dunker Vince Carter for he wants listeners to push themselves to attain the same energy levels. The track gives powerful trap vibes yet does not move from the candid elements of hip hop and rap music. With this music piece, he gives a very important message regarding the genre. If every track deals with the same energy and emotion that motivate the youth, hip hop and rap can definitely rank in the top till doomsday. Stay tuned for the upcoming releases of Papi Versace on SoundCloud.