Mucho Dinero – Book Me For a Show 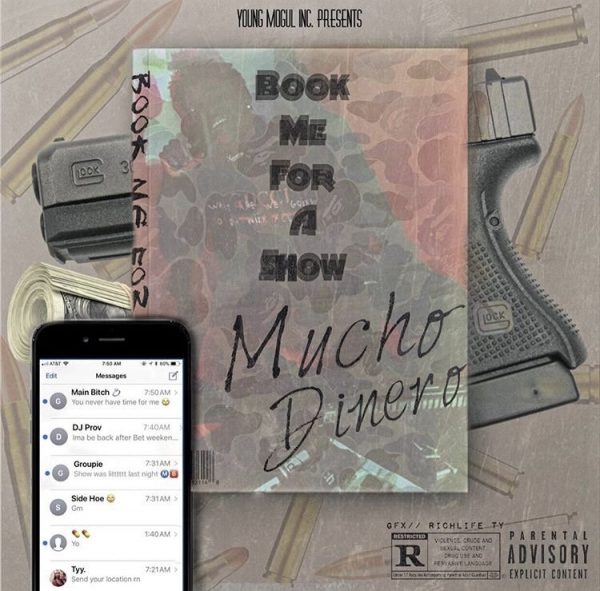 Solo Project “Book Me For a Show”

Los Angeles, CA – August 13, 2018 — Mucho Dinero is a rising artist with a promising future ahead. He discovered his talent for rap after collaborating with his brother, E-Weez, on single “Like to Dab.” This summer, he releases a brand-new mixtape, “Book Me For a Show.”
“Book Me For a Show” is Mucho Dinero’s first solo mixtape. His previous project was a mixtape entitled “Trapping and Dabbing,” in which he collaborated with E-Weez as music group MB. Through its impressive trap beats and club bangers, “Book Me For a Show” showcases Mucho Dinero’s growth and passion for music.
The name for the mixtape comes from Mucho Dinero’s high-energy stage presence. He hopes that listeners will realize his potential and will want to “book him for a show” right away. The mixtape also features artists E-Weez, Larue the Great, Lil Tay, and QUÈ and producers Wade and Nixxo.

Mucho Dinero is a rap artist who is based in Erie, PA, and has also lived in Philadelphia, PA. He learned how to rap from his brother, E-Weez. After they released their first single together on SoundCloud entitled “Like to Dab,” the positive feedback was overwhelming, encouraging Mucho Dinero to start developing his talent even more and taking his own rap career seriously. His major influences include Nas, Meek Mill, Young Thug, and Moneybagg Yo.
You can listen to Mucho Dinero’s latest release, “Book Me For a Show,” on all major platforms, including Spotify, Apple Music, YouTube, iTunes, SoundCloud, and Tidal.