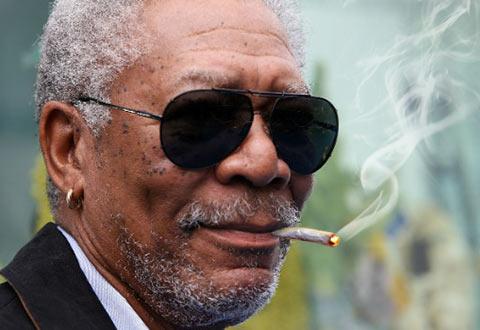 Morgan Freeman is one of the most dynamic personas in Hollywood, and he may have just reached a new level of interesting, if that was even at all possible. The man who could probably narrate a snail’s daily regiment and make it interesting has defended his own use of marijuana in a recent interview with The Daily Beast.

“However it comes! I’ll eat it, drink it, smoke it, snort it!” is one of the more salient quotes from the interview, which has helped his comments go viral on social media. Freeman has medicinally used marijuana since 1977 when it provided him pain relief after a car accident shattered his arm. One of his main points is that alcohol, which is perfectly legal–and heavily promoted–but, “maybe if you have one drink it’ll quiet you down, but two or three and you’re f***ed.”

Science has also continually proved that the pros of marijuana use far outweigh the cons in some instances, one of which is the treatment of mentally challenged children. “They’re talking about kids who have grand mal seizures, and they’ve discovered that marijuana eases that down to where these children can have a life.”

We think it’s time for Morgan Freeman to narrate a marijuana documentary.