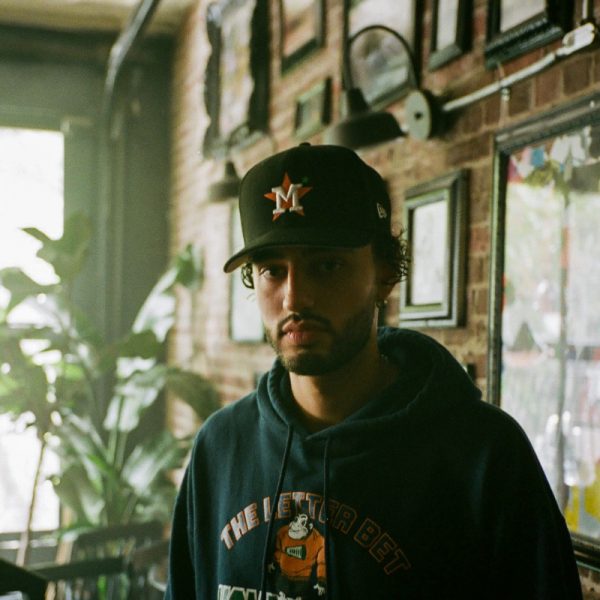 The video’s opening scene itself is a striking contradiction, combining still nature mise en scene with grand, bright red inter-titles introducing the song’s name and credits. The delicate balance (or battle) between the calm and the intoxicating storm is the main story in Yiig’s music video for ‘District Girl’. Serving as a phenomenal debut single, Yiig collaborates with director Sam Olaechea to capture the world made by Yiig himself.

Stylistically, there are witch house elements embedded throughout the song which is reminiscent of early 2010s bands such as Holy Other and Crystal Castles. By adopting an often down-tone, down-tempo approach, Yiig has successfully produced an eerie atmosphere which slowly builds and anticipates a twist. Yiig is an electronic artist who has been helping the music scene with his distinctive and confident sound. Amongst his back catalogue of work are his features on Deep Waters by Rosalvo and for Kay Bandz single, No Mercy. Complementing these alternative Hip Hop tracks with a fresh, effortless backdrop, Yiig has taken the Hip Hop influence into his own work.

‘District Girl’ is as much of an anecdotal journey as it is an instant club classic. It embodies an atmospheric quality with mellow layering and the occasional distorted voice, experimenting with adding and taking away musical components. Yiig embraces each layer as its own piece to the song’s puzzle and lets his music thrive in moments of minimalism or even silence.

Based in Montreal, Yiig joins a long line of experimental musicians and a rich DIY scene. Producing Lo-Fi Hip Hop with a twist of House which feels cinematic and otherworldly, ‘District Girl’ is the perfect track for a music video. In this video, we follow our character – a young 20-something woman – as she lives through her mundane daily routine. From intimate details such as sitting on the toilet reading Playboy, to intensely studying over breakfast, we begin to generate an idea of what type of person she is. Editing, panning, and zooming are all done slowly throughout, reinforcing her hazy headspace as she juggles her reality with her dreams. Whilst lighting in the first half is predominantly natural and involves shadows to create dimension, the second half is filled with neon lighting and elusive nighttime darkness. Shifting from one extreme to another, signalling a conscious decision to choose a different lifestyle, the video has a dark underbelly with its repeated use of shadow.

‘District Girl’ is essentially day and night, rolled into one. Its pitch has a noticeable shift from day to night, replacing playful synth melody to deep, dragged on bass. However, Yiig successfully threads the two together seamlessly and consequently, creating a grand tapestry of innovative, R&B-infused electronic that feels just as cinematic as it does musical. The combination of free-flowing melodies and a green-grey colour palette gives a grittiness to the song and its accompanying video. It is evident that Yiig crafts art which aims to show situations and experiences in their authentic, and sometimes sincere, reality – even when the song and video’s productions are stunning.

Towards the end of the video, the frame rate lowers to produce a dizzying effect as the woman’s state becomes increasingly intoxicated. Several blurred point-of-view shots directly capture the wealth of drugs and drink consumed, affecting both her behavior and the film’s form itself. Sam Olaechea explores the lurid lifestyle concealed by the alluring flower in this music video. This is carried through to its implied tragic ending, where Yiig culminates his heady track with the sudden sound of a gunshot, right at the woman who consumes the flower. Disguising destructive behavior within an object of beauty and temptation, ‘District Girl’ is a doomed tale of a girl who tries hard to be too good and too bad. A journey of experience led by the human mind, which aches to be freed but cannot restrain itself from the prospect of total liberation. This is a truly hypnotizing and impressive effort for Yiig’s debut.