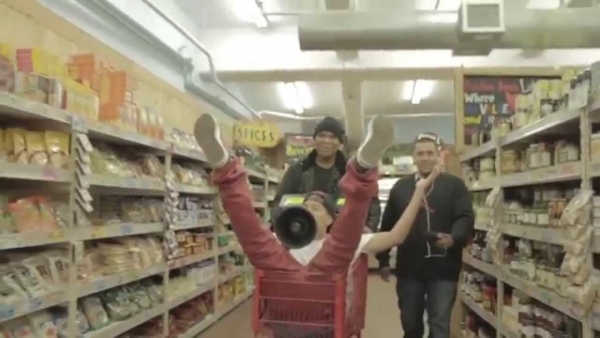 California rapper and self-described “performance artist” Monk McNizzle presents the Christian Hernandez-directed music video for “Eat Like A Player”, the Freaq Show-produced single from his new album Monk McNizzle, featuring production from Big Shawn Costello, Conceit, Freaq Show, and Prime Phillips. The video is a montage of footage from his one-week tour of impromptu performances of “Eat Like A Player” in fast-food restaurants and supermarkets across California. McNasty made his name as a battler on the GrindTime circuit before releasing last year’s Full Metal Rapshet mixtape. In 2011 rapper Malkovich featured him alongside Chris Clarke and Sum on “Chuck Davis” from the Ayatollah Presley mixtape, mixed by DJ House Shoes. In 2012 he dropped the “Dadda Clause” video, then rapped over NYC producer J-Zone’s entire To Love A Hooker mixtape. One other music video has been released from the Monk McNizzle album, “Just Imagine”. Monk says he recorded the song and undertook these performances to “let the public know that they can eat like a f–king boss off of their EBT cards.”