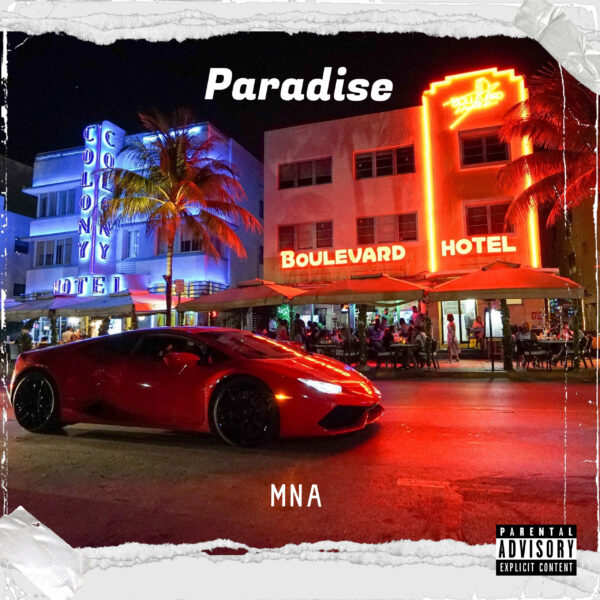 The first thing that strikes you about MNA (Matthew Nino Azcuy) is what a versatile artist he is. The way most people know MNA is as a musician, but the man is also a highly skillful actor, and published author. Today, we’re talking about him in his position as one of the hottest musicians of the 21st century, and definitely, one of the guys to keep an eye on in 2022.

MNA has just come out with the killer album “Paradise”, on which every track serves as a long-lasting hit. Exploring some of his favorite themes, such as romance and spirituality, the artist uses a tight rhythm to deliver a versatile set of rhymes. Songs like the eponymous “MNA” are hard-hitting, yet breathe a breath of fresh air into the listener’s life.

It could be said that this personal anthem is the hottest track on the whole album, especially since it draws such a personal (and frankly, badass) picture of the artist. But of course, that is a matter of personal opinion.

There are also interesting tunes on the album that explore the subject of love. Songs like “Childhood Love Story” come at you with a hot, melodic vibe. It’s a deep and highly nostalgic love song, which will take many listeners back to their first love.

The lyrics on this one, pretty much like all the lyrics on “Paradise”, are written from a deeply personal and inspirational perspective. With his latest release, MNA manages to blend together street elements, with spiritual vibes and delivers a highly memorable ensemble of tunes.

MNA, who currently has over 1000 monthly listeners on Spotify, and over 25k followers on Instagram, is a fascinating young artist, whose words are sure to be remembered forever in the history of music.

We here at VMG had a moment to sit down with the D.C. native to talk about “Paradise” and more.

When it comes to my music, I would say what motivates me the most is the passion for growing as a musician. In today’s day and age, it’s so easy to get caught up in the numbers, likes, streams, popularity, and money. For me, I don’t focus on any of that. For me, there is no place I would rather be than making music. Not only is it therapy for me, but I enjoy the journey, and all the amazing producers, beat makers, artists, friends, and business associates that we meet along the way.

Well, I have known about “Vintage Media Group” for quite some time. When I think of VMG, I think of music as a business and all the legendary artists that have been featured. Legends like Justin Bieber, Wale (who is also from the DMV), and many others. Hip-hop, R&B, and Pop artists grew up with VMG and they continue to properly represent the mainstream and underground markets.

3) Being that you are from Washington D.C., what is the state of Hip-Hop there? How would you title your style of music?

The state of Hip-Hop here has always been interesting to say the least. Out of the Washington DC Metro area we’ve had so many great music acts come out of here and reach new levels of fame and notoriety. The D.C. area has gone through so many waves and revolutions of sounds. Namely ten years ago, go-go was a big scene. Now the DMV is starting to formulate its own trap sound, with artists also giving unique visuals that I don’t typically see in places like Los Angeles or New York. The Washington DC area also has such a diversity of artists. Everyone is represented here.

4) With your most recent project “Paradise” is a vibe, can you give us some details on how you came up with the project?

Paradise was meant to be an experimental or transitional album. Little did I know that over 30 TikTok videos were made using “You Got a Big Forehead” and a lot of streams on “Overtime”. It’s exciting to see these young kids enjoy, but really, I went into the studio and made whatever came to mind. Used very unorthodox beats and genre-blending with my producer over at City’s Best Sounds.

Fans and supporters can find me on Instagram, Sound Cloud, Spotify, YouTube, and iTunes under the name “MNA” or “MNA Matthew Nino Azcuy”

I am honored to be here. So great to be featured by such a world-renown publication. Thank you for all that you do for artists and musicians around the world. Let’s keep making music!

Artist Bio: Raised in the small town of Olney, Maryland MNA (Matthew Nino Azcuy) watched and listened to all of the greatest rappers and musicians during the 1990s and early 2000s. During this golden age of music and music videos, Azcuy was inspired by both rappers and rock groups alike, and when he was sixteen years old decided to make his own music. After years of finding his sound, he teamed up with local producer Nemo, to make his album “Diamond Dog”. Matthew Nino Azcuy is also a published book author, avid writer, and professional movie actor.