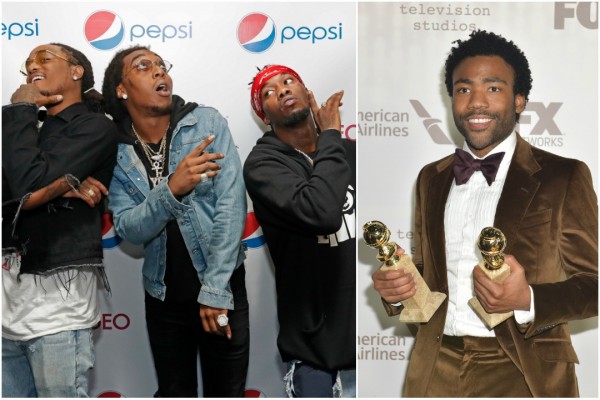 According to the Quality Control executive, the group couldn’t book a late night gig until Donald Glover mentioned them at the Golden Globes.

Migos hit the Jimmy Kimmel Live! set earlier this month, performing their hit “Bad and Boujee,” reportedly smoking out the building like none other just beforehand. The performance was more than just another stop on the group’s Culture promo tour though, as Quality Control boss Pierre “Pee” Thomas told The New York Times recently that the trio were unable to book a late night gig before Donald Glover’s co-sign at the Golden Globes.

“They gave all kinds of excuses—not the right time, it’s not this, it’s not that,” he says. “As soon as Donald Glover did that, the next day, all the people who had just denied us wanted them on their show.”

In January, Glover thanked Migos during his acceptance speech for Best Television Series – Musical or Comedy, Atlanta winning the Golden Globe in its first year out. “I really want to thank the Migos, not for being in the show but for making ‘Bad and Boujee.’ Like that’s the best song ever,” he said, later calling them The Beatles of this generation.

The group made an appearance on Atlanta earlier this year, one of their many contributions to the culture. Their album, Culture, is out today, with “Bad and Boujee” continuing its run as the No. 1 song in the country. The group celebrated both Thursday night, reportedly bringing in $100,000 for a New York strip club.