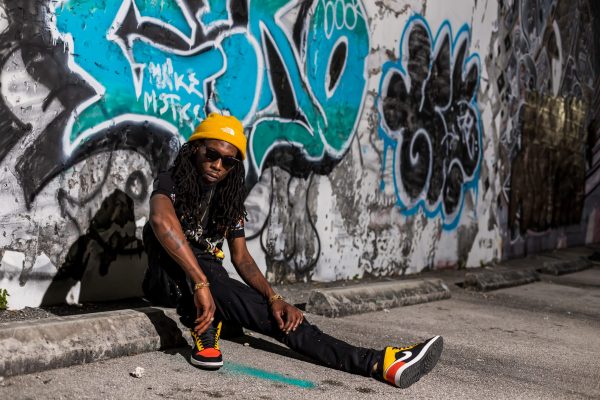 Cheflodeezy is a Jamaican born Miami rapper. Deezy moved to Opa Locka, Miami at the age of 9 where he lived with his mom and younger brother. Deezy found his love for music as a teenager at Miami Central High, when his best friend at the time introduced him to the beat making platform Fruity Loops. After high school, Deezy fell into the street life. By the age of 21 he had multiple arrests, struggled with homelessness and the loss of a few close friends to gun violence. After almost going to prison for undisclosed cases and the birth of his first child llamiyah, Deezy decided to change his life.

The Miami rapper went to culinary school and pursued a career as a professional chef. This is where he got the nick name “Cheflodeezy”. He free-styled and had other students listen to his music on a daily basis. After graduating culinary school, Deezy began to climb in the hospitality industry. Cheflodeezy started to literally blow up in the culinary word where he was featured in SoHo House world magazine as a rising star on Deco drive, and cooking for various celebrities on visits. Never letting his love for music die, Cheflodeezy went to recording studios on his days off and wrote music before and after work on most days. Still dream chasing and dropping music weekly, Cheflodeezy does this for the love of the craft.

Tell us a bit about how you got started in music?

I got started in music when I was a teenager. First I made beats on my desktop computer using fruity loops. Eventually I started rapping, and it’s been on ever since.

You have spoken openly about your hardships in life, from crime to homelessness. Was there ever a point where you wanted to give up on music? Or did music help you through this?

I definitely felt like giving up on music a few times, through hardships, there was a point where I stopped writing and recording completely. However putting my true feelings into 32 bars and a melody hook definitely helped.

How has your Jamaican roots influenced the music you make?

Early childhood memories of me living in Jamaica listening to Beenie Man and Bounty Killer, often arise while writing my songs. I like to think of myself as the perfect mixture of those two artist if they were raised in Miami.

Your name, Cheflodeezy comes from your career in the culinary world. Tell us a bit about your life as a Chef and the exciting opportunities that have come your way?

My culinary life has helped me to reach people and platforms I otherwise wouldn’t have. I have cheffed for most of the artists I aspire to be like so that’s been pretty kool.

Have you been able to mix your love for music with your culinary passion?

Yes, definitely anyone that takes a good listen to my music will hear culinary references and punchlines in almost every song. It’s part of who I am all around.

Tell us about your latest track ‘Koockin and Juggin’? What inspired the track?

The inspiration behind Koockin & Juggin came from me celebrating my growth and elevation being self-made. Cooking/hustling and growing personally and professionally as a whole.

How has the current lockdown situation affected your creativity?

The current lockdown has affected my creativity in a positive way. I’ve actually been putting in double the work in the recording studio. Same with the effort that I am able to put into my writing.

If you could go back in time and give a younger you a piece of advice what would it be?

All you have are your balls and your word, don’t break either of them ever. Be quick to lead, slow to follow.

What else have you got in store for this year and where can we follow your tracks?

The Latter part of this year will be very big for me as I will be releasing my debut mixtape “kitchen talk”. Followed by the first single off my album releasing in early 2021, “Buck The Jack”. I am however releasing singles pretty much monthly leading up to the mixtapes and albums. Beyond Koockin  & Juggin I’ve also recently released “She Luh Dat” featuring a close childhood friend Oso Kev. In June I am releasing my two entries for the summer. “She Don’t Belong To Me” and “Ass Up”. Both party songs. My music can be found on all digital music platforms, and also on my website www.cheflodeezy.com.