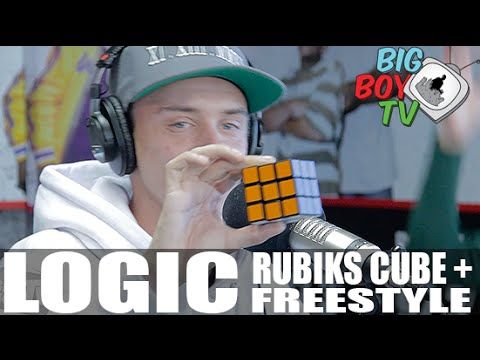 Logic, an up-and-coming rapper from the DC area, has a talent that not a lot of people might know about: solving Rubik’s Cubes. Insanely popular in the ‘80s, the public’s interest in the Rubik’s Cube waned for the past 20 years or so, but has experienced a renaissance in recent years. While solving a puzzle might not be what you’re betting a rapper would be doing with his spare time, Logic isn’t your stereotypical hip-hop artist.

A young biracial man from Gaithersburg, Maryland, Robert Bryson Hall II (aka Logic) has been called the breakout rap star of 2015 with his album Under Pressure. Unlike a lot of other rappers who flaunt their success, Logic lives in a modest house with his wife, recording in his spare bedroom. He doesn’t wear flashy jewelry or drive a cool car. Perhaps as a result of his modest youth, he keeps things simple.

Once people found out that he likes to solve Rubik’s Cubes, Logic is often asked to do so on-camera. This time, however, he is challenged to do a bit more: solve the puzzle WHILE freestyling! You already know he is gonna get the cube done, but you have to hear the rhymes he is capable of while doing it. You’d better bet now that some kids are going to put a Rubik’s Cube on their Christmas list!

Note: for those unfamiliar with what he is doing, it isn’t cheating when he flips the squares around. The puzzle would be un-solvable otherwise. If anything, it shows how well he knows the thing because he actually noticed pretty quickly.