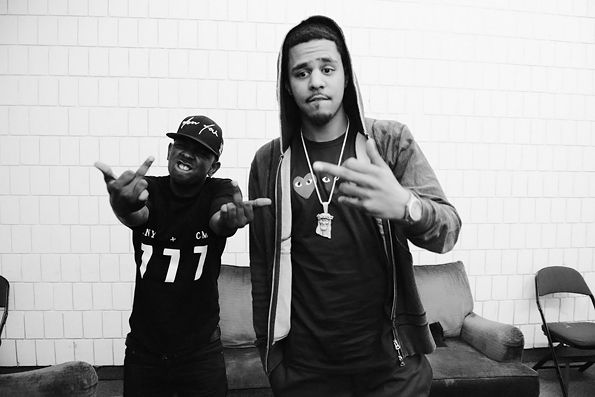 Kendrick Lamar and J. Cole dropped a pair of Black Friday gifts on fans as the rappers traded beats off their respective albums to create their own new songs, both titled “Black Friday.” The swap finds Lamar hopping onto Cole’s 2014 Forest Hills Drive cut “A Tale of 2 Citiez,” while Cole adds his verses to To Pimp a Butterfly’s “Alright.”

In Lamar’s ferocious, nearly four-minute-long verse, the rapper touches on Adele (“I’m rolling deep in that paper like two Adeles”), dubs himself Jimi Kendrix and even throws his support behind Kanye West’s 2020 presidential run. “Play with him, you’re better off voting for Donald Trump / I’m yelling Mr. Kanye West for president / He probably let me get some head inside the residence / I’m in the White House going all out / Bumping College Dropout, God bless Americans,” Lamar says. Later, the rapper gloats, “I gotta lay it / Gotta show you fuckers I’m not to play with / The ruckus had been my favorite / King Kunta the fuckin’ greatest.”

On the other “Black Friday,” Cole boasts over the “Alright” beat, “I sold out the Garden / I should play for the Knicks / Took a couple minutes and I sold out Staples / a nigga getting cream like an old-ass Laker.” At the conclusion of J. Cole’s “Black Friday,” he appears to hint that a more substantial collaboration between the two marquee rappers could arrive in 2016. “When you and K. Dot dropping shit,” Cole says. “Bitch never, they can’t handle two black niggas this clever / But this February, bet shit get scary when I fuck around and drop…” as the verse ends abruptly.

No official explanation for the “Black Friday” drop was provided other than it was “Black Friday $ specials free of charge” from their labels: Lamar’s Top Dawg Entertainment and Cole’s Dreamville Records. However, Dreamville president Ibrahim “Ib” Hamad tweeted, “I didn’t do nothing but spark the idea but thanks for the love. End of the day I’m a fan just like you, I did because it’s fun for us fans.”