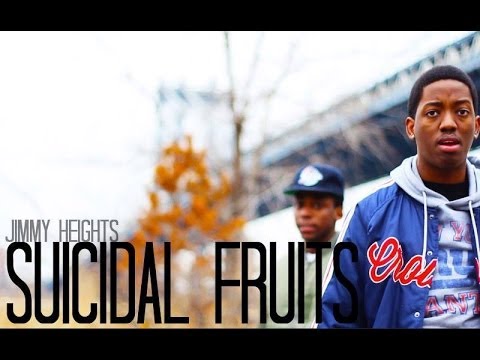 Jimmy Heights, a member of the escalating and growing New York City hip hop scene recently caught a whirlwind of hype surrounding his last visual “Skinny Dippin’ With Naked B*tches” last month. Now he is back one month later with his newest visual, “Suicidal Fruit”. The tune which is produced by Tre Eiht Special was also spit on by fellow Brooklyn emcee Joey Badass Pro Era group members Nyck Caution and Ala Sole. The video takes place throughout Dumbo Brooklyn as Jimmy kicks it with his boys and various members of his kickback crew, “The Nudist”. Jimmy Heights and The Nudist are scheduled for a late spring tour throughout the east coast. He has also announced that he is set to release his first EP “Nudist Republic” digitally during the Fall of 2014. Nudist Republic EP will include both new tracks, “Skinny Dippin’ With Naked B*tches” and a new version of “Suicidal Fruit” which features Spec. K and a new verse from DaiDream. Refreshing, Jimmy Heights possess a flow which cab best be described as amazingly smooth and silver-tongued. With many upcoming artists from New York City looking to break big, it looks like 2014 could be a big year for this New York teenaged spitter. You can follow the youngster @JimmyHeights for more information on both of his upcoming endeavors.