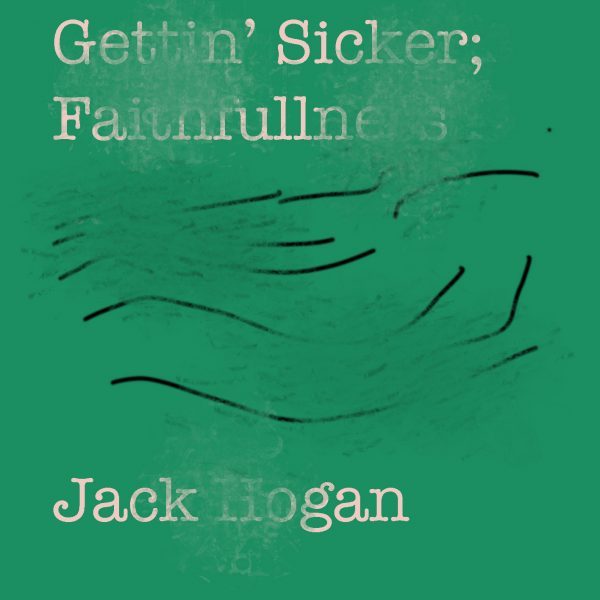 This is the highly anticipated extended single of a session that ended up producing two songs for his upcoming debut album.

Trauma is the primary motivator of my music. I had a terrifying childhood and have worked for 11 years in direct legal services focusing on crime, immigration, mental health, and ultimately homelessness in LA. When you see terrifying things like naked children of color running through broken-glass-filled tent cities, it puts you in a situation where you can’t avoid the hardest truths of the grittiest parts of our world. It’s why Scorsese makes the same movie about the same guy on the same quest to find some redeeming quality in a poorly constructed world. He quite openly speaks in interviews about that being part of a crisis of faith that led him away from the seminary. Eventually, you reach a point where that tragic experience both internally and taken in externally from the constant suffering of others – no matter how melodramatic – flows out. It just doesn’t stop coming out of your hands and mouth. You pick up a guitar or pick up an 808 and never shut up. That actually brings up an even better example: Kanye hit that point of total disillusionment in 808’s and Heartbreak before his mom had died and he became half of the most important marriage in the world. The Trump nonsense and LA breakdowns were all an unfolding of reckoning with the arbitrariness of the world. It’s how he’s dealing with the pain of his reality; his choices are to live it in a flawed way or follow his mom to the grave early. I think he’s brave to live to spill out all those feelings and thoughts uncontrollably into beats and poems. That’s what “motivates” these particular kinds of folk art that dwell on sin and guilt and nausea that I feel a kinship with. It’s just what you do on the day it becomes too much. Or the day you have lived out enough suffering for it to be a story that needs telling.

The Vintage imprint is a prime source for music from songwriters and musicians in hip-hop and rap for me, and the fact it’s paired equally with fashion and there’s plenty of content outside those categories helps keep me exposed to other forms of expression and manufacturing that are rooted in voices that are important for Americans to hear. I first heard of it for its fashion during a relationship with a guy in WeHo. It’s like having a subscription-level magazine for free. It’s definitely made my music better.

3) Being that you are from Los Angeles, what is the state of Hip-Hop there? How would you title your style of music?

Los Angeles has been under serious lockdown during COVID, so it’s hard to say. Not because it inhibits indoor electronic music. It has just really disrupted everyone’s life. Most LA musicians were already struggling to work main gigs and still produce indie material. Even if COVID disappeared overnight here, it would take at least a year for things to come back together. It takes a long time to get a life back together. But we can also look forward to an LA scene with huge swathes of material from what the musicians had to go through, as well as a new batch of people who are pushed over the edge into music by COVID forcing them into situations that made them unable to do anything but have a story to tell.

All that being said, the scene more generally in LA during the years I’ve been here is strangely as racially rooted as some of the darker Southern rap I was used to growing up in Alabama. We idealize California and Los Angeles in the South as places where people are working towards some kind of racial conversation and cross-racial community building. The truth is that Los Angeles is as segregated as the South, but with the added segregation between artists with money and those without money. The neighborhoods become pretty divided in those circumstances. For example, my white friends in Alabama can’t get enough of Kendrick Lamar. White people at UCLA turn their heads sideways when you turn DNA on the speaker in the car. It’s bizarre. But Kendrick is also a great example of how LA’s segregation produces music that goes extraordinarily deep into a specific tradition. To Pimp A Butterfly is probably the best jazz album of the Obama era. But there’s so much potential for fusion in hip-hip racially and economically that is wasted.

4) With your most recent single “Gettin’ Sicker; Faithfullness” is DOPE, can you give us some details on how you came up with that song?

The session that produced Gettin’ Sicker and Faithfullness ended up being the sample from my upcoming album Jack Hogan Dies that hit the moment I came into “my” voice, and it does a pretty good job of showing how I want my projects to transparently reflect a variety of influences. It certainly wasn’t the prettiest; there’s a moment where my voice gives out and falls far out of tune. But that’s what I love about this session; there’s something honest in it even though it keeps the rhythm. Michelangelo kept several of his sculptures well into his career partially intentionally unpolished and mistaken; it was like leaving a thumbprint. It transparently shows how it was made, what the orchestrator was thinking of. There’s nothing wrong with autotune, especially for music you actually want to groove with. But sometimes you want something to be a finished product that has a rough feel. It’s like it’s being made as much as it is finished. The hardware behind this also was a major contributor to making it my first, because I had my one and only clever moment in production: I used a warm large-diaphragm condenser mic put up to a Blackstar tube amp for guitar, and stuck a bass guitar in it instead. I pulled out my beginner interface so the preamp quality would be low and broken. I ended up with a sound that sounded equal parts Motown P-bass and a bass synth lead just jumbling pieces of hardware around. There’s just something in that sound that feels like it really bridges the gap between genres and pieces of my experience. Old, new, borrowed, blue. Not gonna lie, I usually hate listening to my music. I don’t like the sound of my own voice. But this got me vibing in my chair like I was listening to some other person who knows what they’re doing. As soon as I took off my headphones when I finished the synth parts on Maschine, I was like “this is something to send out.”

If they’re in LA and on Grindr, I would tell ‘em to hit me up there. Otherwise, right now the best place is through SoundCloud or at my email jhogan3929@gmail.com. My manager (and all my friends) are forcing me to enter into social media. I gave it all up 6 years ago. SoundCloud will have information for all major platforms in a few weeks.

Influences are hard to figure out. There are so many! Anyone who loves music enough to work in music journalism loves it to know it’s hard not to pick everything up these days when there’s instant access to all music. . . like literally all the music we have. As a people. I can talk about traditions, and some images that really got me and that I often return to as “the well” when I need something to work with. I’m an American lyrical poet. Whitman, Ginsberg, Dylan, Willie Nelson. But people like 2Pac, Jay-Z, Kanye, and Kendrick, in a beautiful twist of fate, completely took over American lyrical poetry. These figures are Whitman’s figures as much as Whitman himself was. They’re rapidly becoming elder statesmen themselves, these giants of the spoken word who explored the reaches of excess and total embrace of talent. One of my favorite lines in American literature is “luxury rap, the ermines of verses, sophisticated ignorance, write my curses in cursive.” And even though I’m not sure people my age who remember life before the Obama Renaissance will ever accept them as the figures they are, they are the Lord Byrons and the cowboys and the troubadours who carried that torch in our formative years. And to quote Abraham Lincoln, “this lawyer is too poor to reject charity.” Even though marketing and imaging make the overlap between Dylan and Jay-Z almost silly to suggest, even musically these two sources for me share a musical background that I also have naturally from my background: old school soul, blues, jazz, Motown, and so on. For Dylan, it was from Wolfman Jack’s pirate radio. For Jay-Z, it was his parents’ record collection. For me, the basic southern roots music that bloomed in places like Chicago and New York after the Great Migration was just something you get by osmosis living in the working South. E, A, B7 for 12 bars is the root of everything that R&B and Hip-Hop are. It’s the modern blues. It just fits. My music reflects this strange experience of being part of a tradition that is broken in half by race in America. I can’t help but do an acoustic country blues track and then throw fuzzed-out bass kits out it sounding like Yeezus, then have a soul riff, a little James Jamerson riff. My music, fittingly, is bipolar through no fault of my own. Americans segregated what is poetry and what is blues from what is rap and what is Hip-hop. But there’s something in the dissonance listening to them simultaneously that drives me musically as much as lyrically. Only Kanye out of the figures I listed got the music bug. Bob needed the Band and Jay-Z Timbaland. So I count myself lucky I have that dissonance to chase around and try and make sense of with my ears. Keeps things coming out.

My only last remarks are to thank you for your time. It was my pleasure to speak with you.

In The Eyes Of SOme, Music Is A Pure Expression Of What's Truly In The Heart Of The Creator. We Actually Believe That! As Music Does And Expresses So Much To The Masses. This LA Native Also Has Shown Us That It's Possible To Express Their Heart For Music As We Dive into Gettin' Sicker: Faithfullness. Instantly We Were Hooked On The Production Of The Project. It Definitely Provides Its Own Vibe. Also Being Considered An Folk Artist We Didn't Gather That Vibe Initially As It Makes His Music Touch Different genres. This Is One Of Our Editors Favorites So Far This Week As They Have Played The Song At Least 4 Times Fully. We Respect The Body Of Work Currently Coming From Jack And Are Anticipating To See And Hear More From Him. Listen To The Dope new Music From Jack And Tell Us What You Think.