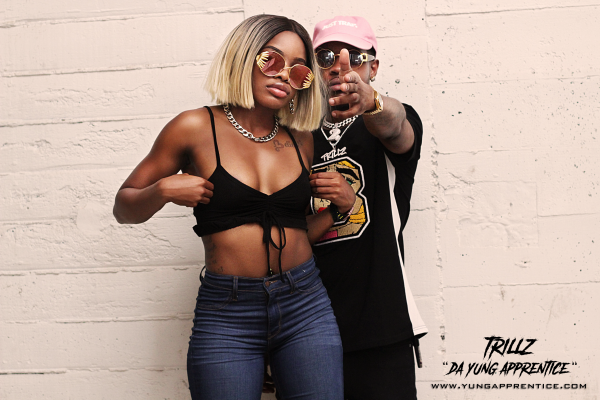 Trillz “Da Yung Apprentice” is a new artist to watch out within the hip-hop genre. Based out of Brooklyn, Trillz, has a very eclectic approach to songwriting, retaining a very direct and personal vibe. His energetic flow echoes the work of seminal performers the likes of Kendrick Lamar, Nas or Biggie Smalls, only to name a few. As Trillz’s full artist moniker might suggest…the apprentice truly learned from the very best of them!

Trillz mastered the craft of merging thought-provoking lyricism with unforgettable hooks and striking rap flows, leading to a unique set of songs created through a career spent making beautiful music. In addition to his passion for rap, Trillz is a fashionable guy who loves to shop, and wears the dopest designers! BKYS is actually one of his favorite brands to wear. In his latest photoshoot, Trillz rocks a black BKYS SummerTime Shootout Tee with a SuperLineATL Just Trap Dad Hat. It’s obvious Trillz has a keen sense of style when getting dressed. We love to see what outfits he chooses, and its clear that he chooses his style carefully. We look forward to his mixtape “Road 2 Riche$ II” releasing later this year.

“Chill With The Gods” Official Video

Find out more and stay connected: