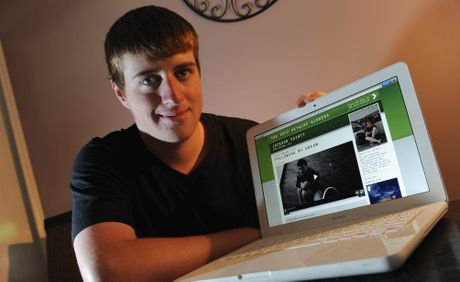 The 17 year old has just been named the Fraser Coast winner of the Heywire contest run by ABC Radio for his story about losing his vision in one eye.

Six years ago, Jackson had just taken up hip-hop dancing and acrobatics when he developed a disease called keratoconus.

“One of my fears was that if I were to lose my vision even more, would I lose my ability to dance with it?” he wrote in his competition entry.

But he was determined not to let the disease stop him from living life, and kept on dancing despite his deteriorating vision.

In December last year, he had experimental surgery to save the remaining sight in his right eye, which has successfully stabilised his vision enough so he is able to get a driver’s licence.

Jackson still loves hip-hop, does lifeguard duty at the Howard pool and wants to become a teacher.

“My eye disease won’t hold me back from achieving my goals,” he said.

Jackson’s mum Natalia Sloan describes him as a “gentle giant”.

“I’m very proud of Jackson, not just for winning this award but more so for what he has overcome,” she said.

“He never gives up.”

There were more than 700 entries and 40 winners this year in Heywire, an annual contest which gives young people from regional Australia the chance to tell their stories.

Jackson’s prize is the opportunity to attend a youth summit at the Australian Institute of Sport and Parliament House in February next year.

To read Jackson’s story, go to abc.net.au/heywire and click on the winners tab and then select 2012 winners.