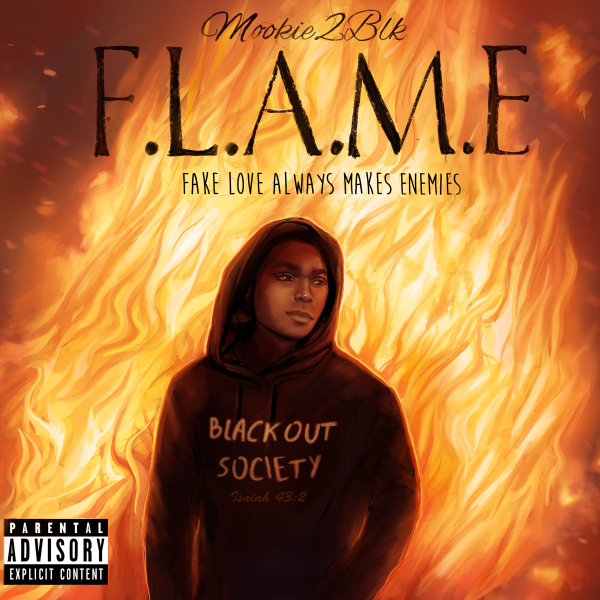 Mookie2blk, born Markus Holbert is a Blackout Society recording artist from Lansing, MI. Mook is back with his 5th solo album “F.L.A.M.E” to claim everything he strives for. He started his journey making music back in 2010. Mookie2blk released his first solo debut project in 2016 titled Birth of a Destiny. That same year he also teamed up with AMA LA VIDA recording artist Tre.b Cardova to release a duo Album titled “Late Bloomers.” In 2017 he released his second solo project titled The Blackout. That same year Mookie2blk released a EP called Black Mirror showcasing the talents of the Blackout Society members. With 2017 being a busy year for Mook, he also teamed up with fellow Blackout Society member Cali Jabbar to create a 7 song duo EP titled “New Faces” releasing his first video with the single “Way Down.” 2018 was a silent but busy year for Mook. He took time off recording to learn multiple fassaites including music engineering, video editing, music marketing, and promotion. in 2019 Mook felt ready to release his 4th solo album titled L.A.M.E. (Local Artist Matter Everywhere) In an attempt to tie everything he learns together, the album L.A.M.E left him hungry for more success!

My main goal in music is to inspire people. I want my kids to see me set goals and never quit until i achieve them. Also show everyone that if you lock in, you can accomplish anything you want. When the people start to understand where I’m headed, that’s the greatest feeling in the world.

A staple in hip hop. I remember when I was a teen and I would pick up a hip-hop magazine like the XXL or the Source and I would get introduced to new music or see how music was rated and thought wow! I gotta check out this music or new artist ASAP! It created a buzz for the artist. And with everything being digital today I feel that Vintage Media is that for today’s time.

3) Being that you are from Lansing Michigan & Fayetteville North Carolina, what is the state of Hip-Hop there? How would you title your style of music?

Being from Michigan has been dope as far as music goes. Everyone wanted to rap like Eminem and Royce Da 5 9 and get a shot like Big Sean. At the moment a whole new style is being birthed in Michigan. I’m a huge fan of the underground sound especially from guys like RMC Mike, Rio Da young OG, and Boldy James just to name a few. Michigan has been known to change the game and I think that’s the best part of being from Michigan when it comes to hip hop. “Originality”
I joined the Army at the age of 19 and got stationed in North Carolina where I got addicted to the sound of the NC A&T Band. It was my first time witnessing that culture. I never saw anything like it. My early 20s were a blur because I just wanted to turn up with the college kids.
With that being said, my style of music is raw unfiltered fun with a conscience touch filled with punchlines.

4) With your most recent project “F.L.A.M.E (Fake Love Always Makes Enemies)” can you give us some details on how you came up with that project?

I always wanted to do a 3 album series but I didn’t want to name the projects “One Two and Three.” So I thought of an interesting way to present it with acronyms.

L.A.M.E (Local Artist Matter Everywhere) was kinda like the introduction. Letting listeners know I’m here and I’m taking this music thing seriously.
F.L.A.M.E was basically a statement addressing all the failed relationships in music due to misunderstandings, jealousy & greed. I showed a lot of people how to succeed and only got fake love in return. I pretty much aired it all out in the song MOTIONS. I got to see that just because they’re with you, don’t mean that there for you. We’re building something special and ego got in the way.

Next up is F.A.M.E ( Finally Accepted My Energy).