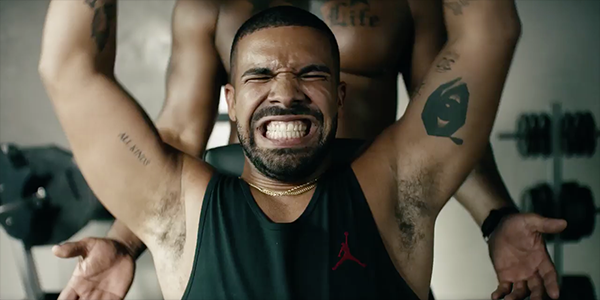 A couple months ago, Taylor Swift — an Apple Music representative — starred in a commercial for the streaming service rapping along to Drake and Future’s “Jumpman” while running on a treadmill. She fell after getting into the song, because haha Taylor Swift is so relatable.

Sunday night during the AMAs, Drake — another Apple Music representative — returned the volley in another commercial singing along to Taylor Swift’s “Bad Blood.” He couldn’t push a final rep of bench press up after getting too into the song, because haha Drake is so relatable also.

And it helps that these two are (rumored to be) dating, because awwwwww they’re singing along to each other’s music, and that’s (somehow) relatable, too.

I don’t know why I wrote more than usual about a Drake and Taylor Swift commercial, but I’m a little tired and we’ve got plenty of stuff coming this week, like an album from The Weeknd and a mixtape from YG, so I guess I’m just hoping this is the dose of fuckery — or at least the large portion of it — we’re getting from this week, and we’re getting it out of the way early.