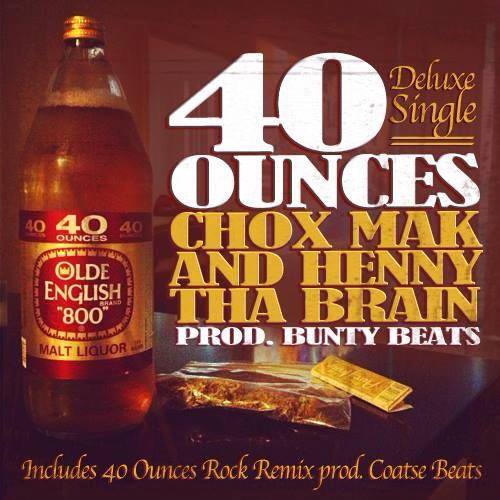 Chox-Mak has been dropping hit after hit lately building his name in the music industry. Not many people know that he has his own artist he is developing as well. With his latest track “40 Ounces” which was originally recorded a couple of months ago to a Bunty Beats production. This track is all about positive vibes and enjoying life to the fullest. Many people that appreciate real hip hop with a rock type twist will love the collaboration. They almost follow in the lane of Run DMC since no one has really done a quality rock hip hop track since Run DMC. They also have a raw hip hop version of the track that will take you back to the 1990’s era of hip hop. It is nothing but raw beats and menacing wordplay all through. Chox-Mak and Henny Tha Brain will be releasing alot more material together in the near future. This is just the start for Henny Tha Brain as Chox-Mak will be showing him the ropes of how to make moves in the industry. The remixed rock production was brought by Coaste Beats and the original “40 Ounces” production was brought by Bunty Beats.