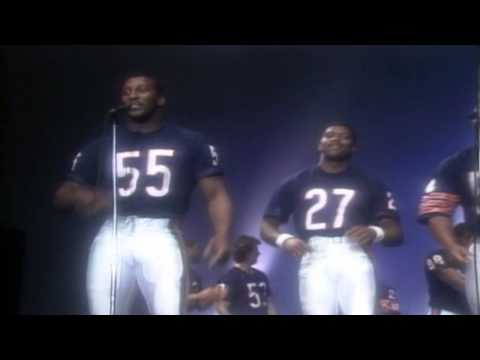 The 1985 rap hit recorded by the players of the Chicago Bears known as the “Super Bowl Shuffle” instantly became a mainstream phenomenon. The single sold more than a half-million copies and reached No. 41 on the US Billboard Hot 100,

making the Chicago Bears the only American professional team of any sport with a hit single.

The Bears would have a 15-1 record for their 1985 season. Randy Weigand, a die-hard Bears fan and music lover, had the idea to write, produce, and choreograph a rap song for the Chicago Bears. Weigand’s girlfriend, cheerleader Courtney

Larson, introduced him to Willie Gault who put him in touch with other Bears players and the “Super Bowl Shuffle” was born. The lyrics related to each player and their craft on the field, and fame in the community.

“The Super Bowl Shuffle” fell in line with the Bears high-media attention as they completed their one-loss regular season. The Bears backed up their musical strutting by dominating their playoff opponents and hammering the New England

Patriots in the Super Bowl with a score of 46-10, the most lopsided victory in Super Bowl history at its time.

The 1985 Chicago Bears were the first sports team to have their own rap video. The song was also nominated for a Grammy Award in 1985 for best rhythm and blues performance by a duo or group, and eventually lost to “Kiss”. The 20th

Anniversary DVD was released in 2004, including the making of the video, outtakes, and the music video itself. Julia Meyer has kept the copyright to the video close to heart. Over $300,000 in profits from the song and music video was

donated to the Chicago Community Trust to help needy families in Chicago with clothing, shelter, and food. This was consistent with Walter Payton’s rap lyrics in the song “now we’re not doing this because we’re greedy, the Bears are

doing it to feed the needy”.