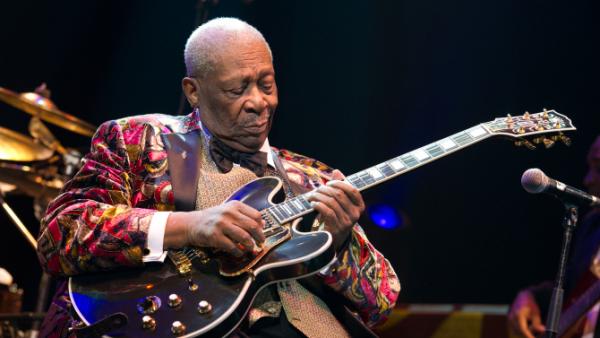 BB King, the King of Blues, dies at 89-years-old. King died in his sleep in Las Vegas, according to his Web site. He was recently taken to the hospital and was receiving hospice care at his home. Known for his hits like “Lucille,” “Sweet Little Angel” and “Rock Me Baby,” the Mississippi native began performing in the 1940s and influenced generations of musicians along the way. Today the world lost one of the greatest musicians to ever live. Hip-hop reacts to the death of Blues Boy King.

“King’s is now the name most synonymous with the blues, much as Louis Armstrong’s once was with jazz,” critic Francis Davis wrote in “The History of the Blues” (1995). “You don’t have to be a blues fan to have heard of King.” He was a star in music for 60 years, and his fame grew exponentially over that time.

From the late ’40s to the late ’60s, King developed his style before exclusively black audiences on the Southern “chitlin circuit” and initially won stardom with a series of authoritative R&B hits backed by brawny big bands on the Modern and ABC labels.

He lifted blues guitar playing to a new level of virtuosity on those recordings. Masterfully synthesizing divergent streams of blues and jazz on his instrument — the Gibson ES-355 he lovingly dubbed “Lucille” — he fused the approaches of such sophisticated precursors as Charlie Christian, Django Reinhardt, Lonnie Johnson and T-Bone Walker into a fluid, hotwired attack all his own.

His forceful yet elegant single-string picking and roaring, emotion-packed singing won him devotees like the white blues-rock guitarists Michael Bloomfield, Steve Miller and Eric Clapton, who helped introduce him to a youthful new audience in the late ’60s. By the end of the decade, he had released a top-20 pop hit, “The Thrill Is Gone,” and was on the way to becoming an icon whose renown transcended his art’s humble origins in the Deep South.

Born Riley B. King in Berclair, Miss., he took up the guitar at age 12. As a boy, he picked cotton and later, in nearby Indianola, he labored as a tractor driver for $22.50 a week.

Like many bluesmen, he got his start singing gospel, but as a teen he was drawn to the accomplished Lonnie Johnson, among the most fluent of pre-war blues guitarists. He also became more deeply involved in the music through his cousin Bukka White, an ex-convict and brilliant blues singer who had recorded for Victor and Vocalion.

Following a brief stint in the Army during WWII, King returned to farming, but after a 1946 accident in which he totaled a tractor, he fled with his guitar to nearby Memphis, where he lived with White and began to hone his professional chops.

Permanently installed in Memphis by 1949, King convinced the owner of WDIA, then the only radio outlet in the nation catering exclusively to black listeners, to give him a 10-minute daily show. He began performing and DJing as “the Beale Street Blues Boy” — soon shortened to “Bee Bee” King and finally to B.B.

A first single for Nashville’s Bullet Records went nowhere, and a session produced by future Sun Records impresario Sam Phillips came to nothing. However, a deal with L.A. R&B label Modern Records’ RPM imprint spawned the 1952 hit “3 O’Clock Blues.” The impassioned slow blues, recorded at the Memphis YMCA, soared to No. 1 on the national R&B chart and stayed there for five weeks.

During 11 years on Modern’s labels, he released three more No. 1 R&B sides — “You Know I Love You,” “Please Love Me” and “You Upset Me Baby” — and a total of 28 chart singles, including staples of his live sets like “Woke Up This Morning,” “Every Day I Have the Blues,” “Sweet Little Angel” and “Sweet Sixteen.” He became one of the most popular attractions on the black touring circuit, rolling up hundreds of dates as he took to the road in a customized bus.

By the early ’60s, King had wearied of Modern’s half-hearted, budget-line marketing of his music, and in 1962 he was signed to ABC-Paramount by Sam Clark, the same executive who had snatched Ray Charles away from Atlantic.

His early tenure at the label produced some minor hit singles and one landmark album that became a blueprint for many a young blues guitarist: “Live at the Regal” (1965), a powerful set recorded before an involved and loudly appreciative audience at the titular theater on Chicago’s South Side. However, he remained largely unknown to the white populace as he stuck to playing before black crowds and eschewed appearances at folk and jazz festivals and international touring.

He stepped into the rock spotlight in 1967 after pleas from acolytes Bloomfield and Miller led San Francisco promoter Bill Graham to book him on a bill at his Fillmore ballroom with Miller’s popular band and another top Bay Area attraction, Moby Grape. He followed up that wildly received date with more shows in the rock halls of the era, and he also became a regular in Las Vegas’ lucrative showrooms. By 1969, he was opening the Rolling Stones’ arena gigs.

While his heightened profile pushed his 1969 LP “Live and Well” to No. 56 on the national charts, “The Thrill Is Gone” made King a legitimate pop star. The string-drenched remake of Roy Hawkins’ 1951 ballad climbed to No. 15 on the pop singles chart and thrust the album “Completely Well” to No. 38. It won a Grammy Award for best male R&B vocal performance — the first of King’s 15 Grammys — and in 1998 it entered the Grammy Hall of Fame. At the age of 44, King had completely arrived.

The ’70s were fertile for King, as he reached the charts with several popular and imaginatively produced albums that found favor with both his new and old fans: “Indianola Mississippi Seeds” (No. 26, 1970), a pairing with Leon Russell; “Live at Cook County Jail” (No. 25, 1971), cut at the Chicago penal institution; the obligatory British all-star session “B.B. King in London” (No. 57, 1971); and collaborations with R&B/blues peer Bobby “Blue” Bland and jazz trio the Crusaders.

King’s career cooled off in the early ’80s, but he was acknowledged in 1987 with a lifetime achievement award from the Recording Academy and, in just its second year in existence, induction into the Rock and Roll Hall of Fame. In 1988, he extended his reach yet again with a guest shot in superstar Irish band U2’s doc “Rattle and Hum” and a show-stopping performance of “When Love Comes to Town” on its soundtrack album.

In 1991, King inaugurated a branded chain of blues clubs around the country with the opening of a venue on Memphis’ Beale Street. He was the marquee name on the all-star sessions “Blues Summit” (1993) and “Deuces Wild” (1997). (The similarly styled “80” followed in 2005).

At the turn of the millennium, at age 75, he enjoyed his commercial high-water mark with “Riding With the King,” a co-billed project with star pupil Eric Clapton. It peaked at No. 3 in 2000, sold more than 2 million copies and won an inevitable Grammy as best traditional blues album.

He received Sweden’s prestigious Polar Prize for music in 2004. An autumnal high-water mark came four years later: “One Kind Favor,” a reflective contemplation of the past and imminent mortality, produced by T Bone Burnett, featuring covers of such lifelong inspirations as T-Bone Walker, Lonnie Johnson and Blind Lemon Jefferson. It collected a valedictory Grammy for traditional blues album.

King, who was diagnosed with diabetes in 1990, played concert dates in 90 countries and routinely continued to perform 100-150 shows a year until late in his career.

Twice divorced, he reportedly fathered between eight and 15 children.