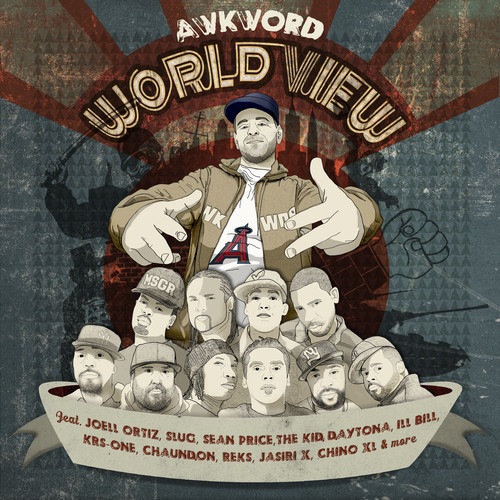 “NYC underground mainstay AWKWORD has been hard at work on World View, his 100%-for-charity digital full-length, for five years. Now that’s what I call Dedication. After half a decade of perseverance, he’s finally secured a release date for the set and, to celebrate, he’s premiering a brand new single in the DJBooth complete with the official art work (above). Here, a pensive piano beat by Romania’s Dismas and Serbia’s Trillian backs AWK as he tells the story of Hezues R. An underprivileged youth raised in the ‘hood by a single mother, he was inspired to found the charity Guns 4 Cameras after nearly losing his life; he was shot at 22 times at close range with a 22 at age 22. Brooklyn emcee Centri laces the final verse with a harrowing personal narrative from the street. Sponsored by The DJ Booth and Morgan Stanley, World View will be released for digital purchase on February 2, 2014 with all proceeds from its sale going to Guns 4 Cameras.” — The DJ Booth

Donate 100% to CHARITY when you buy “Dedication”: