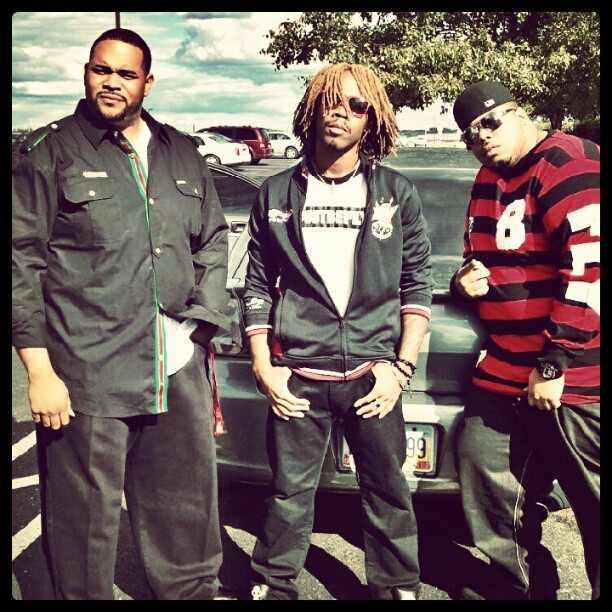 Amarie – How long has the band been together?

Alchemy Kings – 7 months give or take
And whose idea was it? It was originally brought up by Esquire.
After speaking with Mr. Murda, it was decided to add Adrian; a
long-time collaborator and friend. Having worked together on
Various previous projects, the chemistry of the three made the
project necessary.

Amarie – Why did you choose Alchemy Kings as a band name?

Alchemy Kings – Words were thrown around between Esquire, Murda, Adrian, and others until
Esquire coined the name ‘The Alchemy Kings’. Merriam-Webster
Defines it as…
1: a medieval chemical science and speculative philosophy aiming
To achieve the transmutation of the base metals into gold, the
Discovery of a universal cure for disease, and the discovery of a
Means of indefinitely prolonging life
2: a power or process of transforming something common into
something special. The later definition encompassing our true thought process.

Amarie – In your personal opinion is there a difference between Rap and
Hip Hop?

Alchemy Kings – Yes, Rap is a music expression. Hip Hop is a definitive
Culture, birth here in America. 5 Pillars anyone?

Amarie – How would you describe your music?

Alchemy Kings – Like no other. We are an Eclectic mesh of melodic R&B overtones, mixed in with strong Hip-Hop rhythms. We bring diversity to the scene, refusing to be kept in a box.

Amarie – What message do you hope to send in your music?

Alchemy Kings – Our music is for everyone. It satisfies. We tap into all genres. Listen. You be the judge. #hottshyt

Amarie – Any upcoming projects or mixtapes coming out anytime soon?

Amarie – What do you have on your mixtape that can relate to the ladies?

Alchemy Kings – Body Shoppe, HomeGyrl, and Bad One, You Can Have It All, Eye Candy Girl, There are five reasons, and many more, stay tuned.

Amarie – Is there a group leader?

Alchemy Kings – We all speak up. Everyone has their areas
Of expertise, this lends to decision making.

Amarie – Is there a national artist you would compare your sound to?

Alchemy Kings – We draw from different areas. To name few: The Roots, Timbaland,
Ludacris, or a touch of John Legend. Truthfully. We are paving our
own lane.

Amarie – what conflicts do you normally run into when working together?

Alchemy Kings – We all bring something specific to the table. The only thing we
Argue about is who is buying the Yuengling or Heineken.

Amarie – How do you feel about Dayton Artists?

Alchemy Kings – We are all bubbling to the brink of success. The question is, “…who is going to kick the doors open?” Our bet? The Alchemy Kings.

Amarie – Any local performances this year?

Alchemy Kings – We started the year with a few shows throughout Montgomery County. Since then we’ve opened for events with Twista and worked as the Official Representatives for The Source Magazine and sponsor, Royal Blunts in Columbus,
OH in early May. Next, to show diversity, we open the sole
Opening performance for R&B Legend, Al B. Sure at The Secret
Lounge in Columbus, OH.

Amarie – What Dayton Artist would you like to do a show with?

Alchemy Kings – Whoever is prepared to step outside of the average?

Amarie – Do you have any singles about to be released?

Amarie – How would u say you are different from most music groups?

Alchemy Kings – Our chemistry. We effortlessly touch almost every genre and
Genuinely enjoy what we do.

Amarie – What opposition have you met?

Alchemy Kings – Not perfecting the ability to stay awake 24 hours for many nights on end.

Amarie – When you hear the name Vintage Media Group, what comes to mind?

Alchemy Kings – A positive media force that represents the music artist community; independently and on a national level. An urban
Catalyst for the budding music artist and the Hip Hop culture and
It’s enthusiast.

Amarie – Are you participating or up for Nomination in the Ohio Hip Hop
Awards?

Alchemy Kings – Always stay true to what you believe in. You can accomplish anything if your heart is into it.” Style of a hustla/these slick, young brothers/wanting for
Nothing/like no other/may they all fall down/ in the end they gone
Have to respect your crown…” – The Alchemy Anthem chorus, The
Alchemy Kings

ALSO CHECK OUT THERE VIDEO PROMO FOR “BODY SHOPPE”