ABIGAIL ASANTE GOES IN ON NEW SINGLE ‘SO WHAT’ 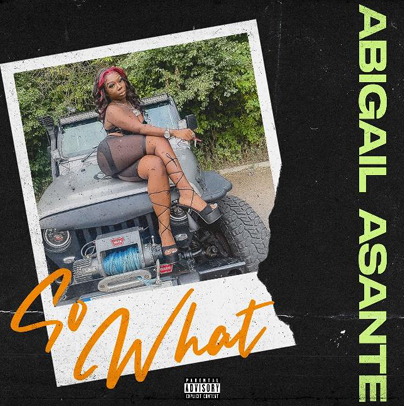 After strong anticipation from fans, Abigail Asante has just released her brand-new single ‘So What’. ‘So What’ is a strong drill anthem channeling female empowerment, not needing a man, and knowing your self-worth.

Abigail Asante is here to finally claim her space in the UK drill scene with her husky voice, strong bars, and distinctive flow, and she is back stronger than ever. With her signature dance routines and strong visuals in her music video, the single has significant replay and rewatch value, and this is only her beginning.

BIO: Abigail Asante, best known for her hard-hitting, trend-setting, and viral music releases as part of a duo with Ivorian Doll, was the first female duo to surpass 1 million views in female drill history. Previously, she was known simply as Abigail but since going solo, she is known as Abigail Asante (paying homage to her Ghanaian roots) and this is her rebirth.

Abigail Asante, whose distinctly raspy and husky Drill delivery has broken Spotify and YouTube records for UK female rap (amassing over 3 million streams collectively), is on a mission to break down walls and take up space in the male-dominated arena of rap- albeit without being pigeonholed into a single genre.

Today, Abigail Asante is a musician, dancer, writer, and actress who runs a mentoring program that is dedicated to female empowerment. After realizing the reach and reception of her honest lyricism, she vowed to write music that elevates women and exposes the truths and consequences of colorism.

Given her drive and ambition, she is and will be a threat to the industry. With a commitment to release music every 6 weeks from November onwards, bookings are already secured for several live performances and freestyle platforms. 2023 is set to be a very exciting year for Abigail Asante.